Asking For A Friend: Do Your Kids Know You're Polyamorous? 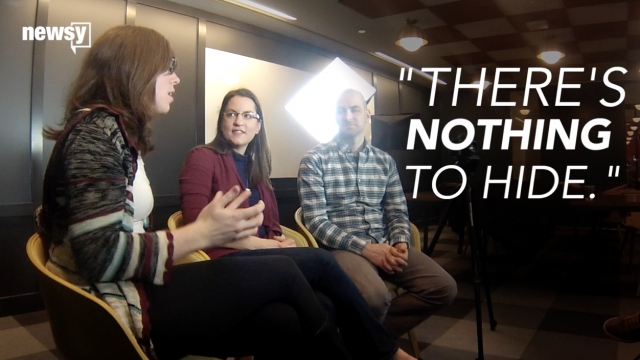 Three parents under one roof? Newsy's Cody LaGrow asks a polyamorous unit about raising a family.

Raising children in any household can get tricky, but how do kids respond to having polyamorous parents?

Newsy's Cody LaGrow: So you guys have children involved in your unit?

Caroline: "Josie and I have two children."

Cody: Do they know about your polyamorous relationship?

Josie: "I mean as much a 6-year-old and 1-year-old can. Caroline kisses both of us in front of them. The older one sees us getting out of bed in the morning with other partners. There's nothing to hide."

Cody: Adam, you are the primary caretaker?

Cody: I'll just shut up and let you describe what you do.

Adam: "Currently in our situation, because they have full time jobs, I have been able to not work a job and be paid by them to be a stay-at-home nanny or parent. With both of the kids, I have developed a very 'parent' relationship with them."

Cody: Do they call you dad?

Cody: Do you think you're doing more than some dads out there who have the title "dad"?

Adam: "Yes. I think I'm providing an awesome amount of love. I have a big relationship with the kids, and that's something I got into poly for because I didn't know if I could take steps to be actually a father to a child of mine, but I did want children in my life."

Cody: How do you think this will impact their views of relationships growing up?

Caroline: "I think it’s already showing that our oldest child is very communicative when it comes to relationships and his feelings. The other day, there was a friend of his at the playground who was sad because he wanted to play with him and only him. And our son had to say, 'I really want to play with you, but I also have other friends. Can we play tomorrow? I would like to play with my other friends now.'

Cody: Kids are cruel. Do you think this opens the door for criticisms for your choices to impact their life?

Cody: Has it happened yet?

Josie: "We don't go shouting about it. We don't hide it. Any combination of the three of us will go pick the older one up from school. People know that all three of us are caretakers and that we all three live together. Most of the time, who's having sex with whom doesn't come up in conversation."

Cody: Especially among 6-year-olds, I guess.

Adam: "But I wouldn't say that you guys haven't been discriminated against. It's the people also who just choose not to talk. Or choose not to come up to you. I think it happens. I don't think it really happens directly."

Cody: Do you think it will happen in a way that will make you miss out on a relationship you’d actually want to be a part of?

Caroline: "Probably not. I mean, if someone is going to discriminate against us, for this reason, I'm not sure we'd want to be friends with them in the first place."

Adam: "People have strong ideas about the bonds of family. And when they see something, a family, that is different and going about it in a different way, they become very scared. ... Ask any parent whether they would like another adult that was not just committed but helpful to raising a kid, and they'll say, poly is interesting to me."