Asking For A Friend: Is Polyamory A Feminist Idea? 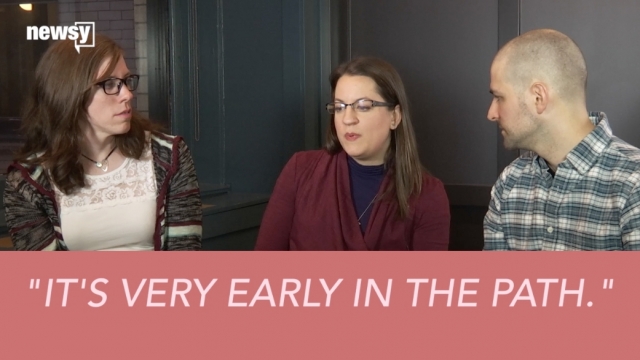 Polyamory reshapes what relationships look like. Newsy's Cody LaGrow asks a polyamorous unit about the importance of this progressive movement.

Polyamory reshapes what most people think a relationship should look like. Caroline, Josie and Adam explained why polyamory is a progressive, feminist idea.

Newsy's Cody LaGrow: Do you think polyamory is on a path to turning a new page and being more accepted?

Caroline: "I think yes and no."

Caroline: "It's very early in the path. I think that because polyamory is viewed so much more as a choice, I think that a lot of the LGBT movement has made a lot of progress based on the idea that it's not a choice ... A lot of being polyamorous is having a sex-positive attitude. Not viewing sex as something that is used to control, manipulate, have negative connotations, to shame, not something to be shameful about. No matter how you like sex."

Cody: Why in 2016 do you think people still care who other people sleep with?

Adam: "They would rather say, 'It's always worked like this, so let's keep doing this. Because my idea is that more sex positivity to a family is going to wreck it.' They're just really scared of it. And I think we are just generally not not as scared about that, and I think we can experiment."

Cody: It's not a sex-positive culture, and you're still made to feel shameful and regretful if you're having sex with multiple partners; how does that make you feel day to day?

Caroline: "Well, honestly, I've gotten over it. There's only so much slut-shaming you can live through before you're like, f*** it, I don't care. But, I think that slut-shaming is a huge part of our culture. You have to build enough confidence in what it is that you're doing and who you are to overcome that. And it's a very, very difficult thing to overcome, especially whatever your background is, if that's been a huge part of controlling you in life."

Cody: I think people tend to think of love as this one pie. And you only have so much pie you can hand out to everyone before you run out of pie. Is that true? Or do you just somehow keep finding more pie?"

Josie: "You know, it's funny. People think that about relationships, but they don't think that about having kids. Nobody thinks, like, I've already got a kid, if I have another kid I'm going to love this one less. That's not something that anybody thinks. It's the same thing."

Cody: What do you want someone to take away from this?

Josie: "I mean sex can be a part of it. It doesn't have to be. Of what these relationships are. Being polyamorous is really more about allowing our relationships the freedom to become whatever it is they want to be."

Adam: "It's very complicated. And for people who don't really commit themselves to knowing their own feelings and being honest and being open about the whole process. It's going to be tough."

Caroline: "It's about love, I think for me, it's been very important in my life to allow love to flourish and take the forms that it should or that it wants to and to not limit it or constrain it for what 'you're supposed to do.' And it's been very rewarding."