Asking For A Friend: Is Polyamory Just About Having More Sex? 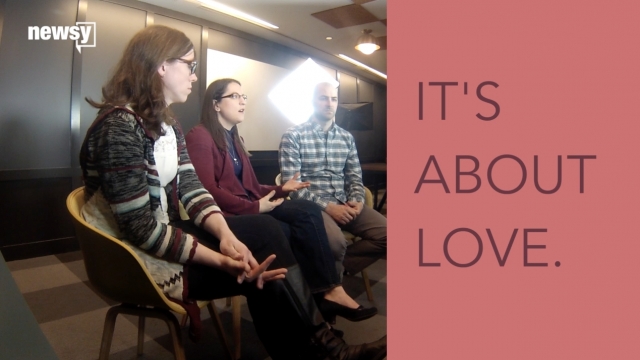 Polyamory can come with many partners and many misconceptions. Newsy's Cody LaGrow asks a polyamorous unit what it's really all about.

Polyamory, the philosophy or state of being emotionally and sexually involved with more than one person at the same time, comes with many misconceptions. Caroline, Josie and Adam cleared up questions many may have about polyamory.

Newsy's Cody LaGrow: Do you think monogamy is unrealistic?Caroline: "No. I hate the idea of polyamory and monogamy being pitted against each other. Obviously, one thing that makes polyamory different than monagamy is, in theory, you are having sex with multiple partners. But it's not just about sex. You are loving multiple partners. And that's really what polyamory is about. It's about love. And that expression of love usually leads to sex."

Cody: How often do you hear that you're having your cake and eating it, too?Josie: "You hear it ... and that it's just different. I think a lot of people view us as these weirdos on the fringes of society, but to us, it feels weird to not have a choice. And just sort of default to monogamy because that's what everybody does."Adam: "I found that monogamy, sort of, constrained my ideas about love. Like, I needed to find the one person for me. That is a huge thing to go about doing."Caroline: "What do we in society call 'the one'? The one romantic person in your life, the one sexual person in your life, your best friend, the one person who is going to give you financial security, the one person who is going to give you family security, who you're going to have children with, who you're going to build all of these things with. And I think in a lot of societies and a lot cultures, we rely on more than one person to do that."

Cody: How do you manage jealousy?Josie: "When they first started dating, I realized I was sort of having a night, and I'm jealous, and this is a little hard, and I learned what I needed to do. ... At the end of the day, it's not their job to make me not jealous. It's mine."

Cody: So we all should be polyamorous?Group: "No! No! No!"Adam: "That's a trainwreck."Josie: "When we were monogamous, we definitely could've benefited from the communication skills, the self-reflection skills, really all of the things we've learned since becoming poly. Any relationship can benefit from that. Being poly just sort of forces it on you. In a way, that monogamy doesn't have to often."

Cody: Why do you think people have such a hard time grasping the concept of polyamory?Caroline: "I don't think that they do. I think they just don't put it in the context of romantic relationships. You can have one child, and introducing another child in no way pulls love from that first child."Josie: "Everyone understands that you can be in love with a partner and want to sleep with somebody else. People cheat all the freaking time. It's amazing the number of people who have less of a problem with cheating than they do with polyamory. We are doing the same thing; we are just being honest about it. Isn't that better?"Caroline: "It's somehow scary or threatening, but I think people completely understand the idea but only apply it to one particular kind of relationship."

Cody: So, you're telling me you guys are normal?Josie: "Our daily struggles have very little to do with me and Adam competing with each other over Caroline's time or anything like that. More like, how are we getting dinner on the table tonight?"Caroline: "Who did the grocery shopping? Who's going to pick up the car?"Adam: "How exactly to do the dishes?"