Asking For A Friend: So, You Have A Wife And A Boyfriend? 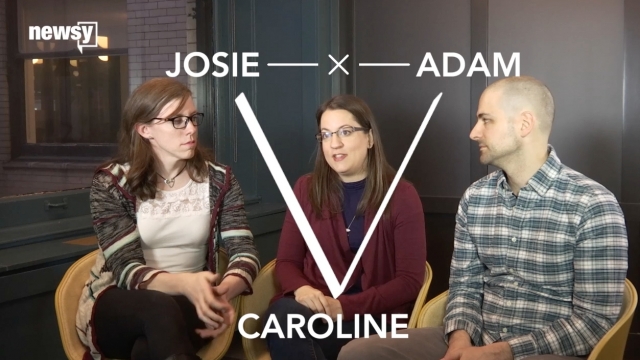 Polyamory comes with its own vocabulary. Newsy's Cody LaGrow asks a real polyamorous unit about the lingo that comes with this lifestyle.

Caroline is married to Josie. Caroline is also in a committed relationship with Adam. They share one house, two kids, and all call the shots under the same roof. This is a polyamorous relationship.

Polyamory, the philosophy or state of being emotionally and sexually involved with more than one person at the same time, comes with its own set of words. I asked about the lingo that comes with this lifestyle, and this "V" helped us define a few of them. What's a "V," you ask? Vocab lesson below:

V: a poly structure that includes three people, in which two love the same person but not each otherTriad: a poly structure in which three people are all in committed relationships with one anotherQuad: a poly structure in which four people are involved, although all might not be sexually and emotionally linked to one anotherMetamour: people who love the same person but not each other Polycule: a poly structure not confined to a specific shapePolygamy: the practice or custom of having more than one spouse at the same timePolyfidelity: a form of polyamory where all members agree to romantic relationships with one another and no one else; a closing-off or settling of the poly unitUnicorn: a single, bisexual woman seeking to join a couple presenting as heterosexual in a triadUnicorn hunters: a couple presenting as heterosexual and seeking a single, bisexual woman to form a triad

This video includes music from Joakim Karud / CC BY SA 3.0.