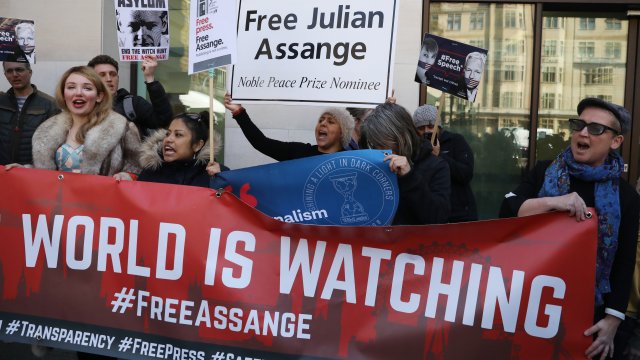 The editor-in-chief of WikiLeaks called the arrest of its founder, Julian Assange, an attack on journalism.

"Well, only thing to add to this is the fact that this is a dark day for journalism. This is journalism. It's called conspiracy. It's conspiracy to commit journalism," he said during a press conference Thursday.

The U.S. government is charging Assange with conspiracy to commit computer intrusion, or hacking of the Department of Defense. Back in 2010, he helped Chelsea Manning with a code to obtain classified U.S. intelligence. What the government did not do was charge Assange with espionage. In other words, he's in trouble for hacking information, not for publishing it.

And that is largely regarded as good news for journalists and publishers. Still, if Assange is extradited to the United States, he could face more charges. And some, like Edward Snowden, say that no matter what the charge, members of the press should be concerned.

Snowden said in a tweet, "Assange's critics may cheer, but this is a dark moment for press freedom."

Other press freedom advocates have made the argument that journalists benefited from the classified information WikiLeaks put out. If prosecutors charged Assange with these crimes, some say, other journalists would be guilty of the same ones.

The ACLU said in a statement, "Any prosecution by the United States of Mr. Assange for Wikileaks' publishing operations would be unprecedented and unconstitutional, and would open the door to criminal investigations of other news organizations."

Those on the other side say if Assange helped with the hack, then what he was doing was not journalism.