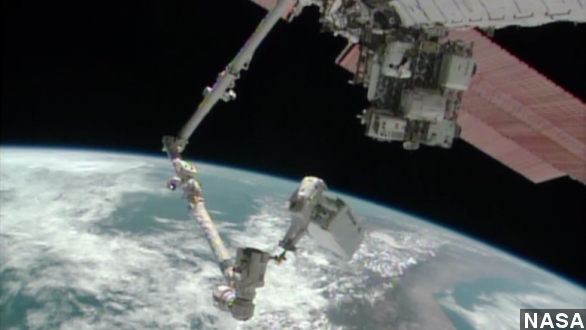 The fuel pump that malfunctioned earlier this month was successfully replaced by two NASA astronauts.

NASA's mission to fix a cooling pump on the International Space Station was a success, with two astronauts able to make the final repairs during a Christmas Eve spacewalk.

"Rick Mastracchio and Michael Hopkins ... The two astronauts are floating outside the International Space Station to fix the cooling system." (Via Al Jazeera)

The holiday spacewalk involved installing a new 780-pound ammonia pump to replace the faulty one that was removed during another spacewalk last week. (Via Twitter / @NASA)

The old pump malfunctioned earlier this month, forcing astronauts on board the station to turn off any non-essential systems, including some science experiments. Parts of the station have been blocked off ever since to keep the station's coolant needs low. (Via NBC, CBS)

The repair mission wasn't entirely without incident. The astronauts were contaminated with frozen ammonia flakes while making their repairs, but they stayed in the sun the rest of the mission, giving the flakes time to bake off their suits. Those suits, by the way, worked perfectly despite a malfunction last week.

There's only been one other spacewalk on Christmas Eve in NASA's history. It took place in 1999, when the crew of the space shuttle Discovery worked to repair and upgrade the Hubble Space Telescope. (Via YouTube / NationalSpaceSociety)

Tuesday also marked the 45th anniversary of the iconic Earthrise image, taken by Apollo 8 astronauts back in 1968. (Via Twitter / @NASA)

One more spacewalk has been scheduled for Friday, where two Russian cosmonauts will install new cameras on the outside of the station and restart some science experiments.