At Least 36 Killed In Turkey After 6.8 Magnitude Earthquake 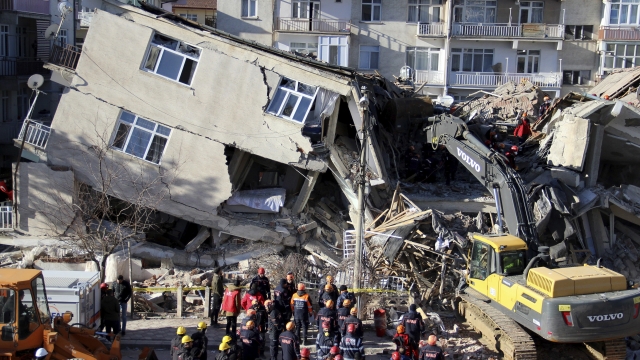 The initial quake struck in eastern Turkey, about 340 miles east of the capital of Ankara.

The death toll in Turkey has risen after a devastating earthquake Friday.

On Sunday morning, the Associated Press reported at least 36 people dead, and the country's emergency management agency said 1,600 were injured. Forty-five survivors have been pulled from the rubble.

The initial 6.8 magnitude earthquake struck in eastern Turkey, about 340 miles east of the capital of Ankara. There have also been more than 700 aftershocks, with four of  them over 4.0 magnitude. Two major fault lines run through Turkey and earthquakes there are frequent.

Thousands of rescue workers are in the area searching through collapsed buildings and homes in multiple cities. Private groups and volunteers are also responding to provide food and emergency shelter.

Turkish President Recep Tayyip Erdoğan visited the earthquake-hit region Saturday and participated in a funeral ceremony for two of the victims.

Beyond search and rescue operations, emergency response officials are also surveying damaged buildings for structural safety. Crews have identified more than 700 buildings that were seriously damaged or destroyed.

Additional reporting by Andrew Wilks of the Associated Press. Contains footage from CNN.