At Least 49 Dead After Mosque Attacks In New Zealand 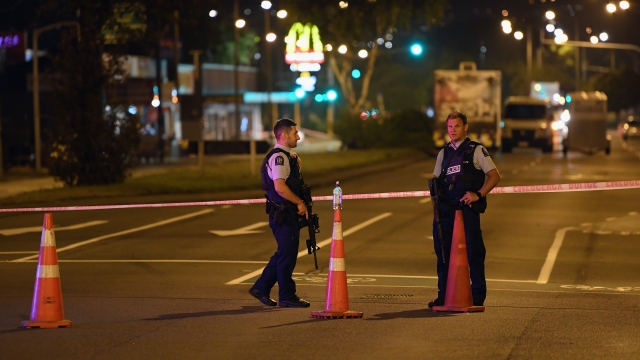 Police say one of three people arrested in connection with the attacks has been charged with murder.

At least 49 people are dead and dozens of others are wounded following shootings at two mosques in Christchurch, New Zealand, on Friday.

"This is one of New Zealand's darkest days," Prime Minister Jacinda Ardern said. "Clearly what has happened is an extraordinary and unprecedented act of violence."

New Zealand Police Commissioner Mike Bush said four people were taken into custody after the attacks. He said none of them were on any active watch list.

One of them — a man in his late 20s — has been charged with murder. He's scheduled to appear in court Saturday morning. Authorities later confirmed that one of the other three people detained was not involved in the incident.

The attacks on the two mosques occurred while people were inside both for Friday prayers.

Multiple reports say one of the suspected gunmen broadcast live footage of one of the shootings online. Police later called on the public not to share the footage and Facebook confirmed it had removed both the video and the account associated with it.

Police say officers also discovered two improvised explosive devices attached to a vehicle as part of the attack. Bush told reporters Friday authorities had already disabled at least one of the devices.

The city of Christchurch was still on lockdown late Friday night local time as police continued to investigate the attacks.