Officials Release The Name Of The Fort Lauderdale Shooting Suspect 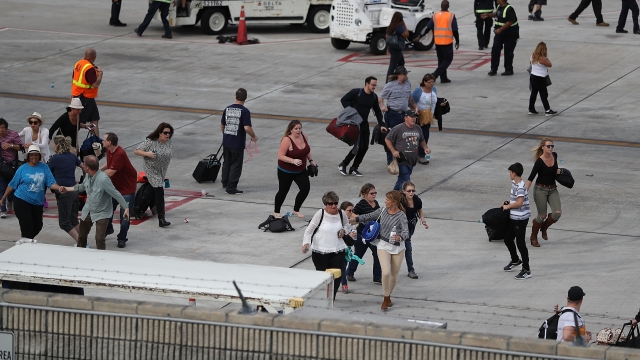 The shooting at an airport terminal killed five and injured six others.

Authorities have released the name of the gunman accused of killing five people and injuring six others at the international airport in Fort Lauderdale, Florida.

Officials say Esteban Santiago opened fire at the baggage claim area of Terminal 2 on Friday. Outlets report he packed a gun in his checked luggage and retrieved it at baggage claim.

Newsy's partners at WPTV report Santiago was in the National Guard and served in Iraq before he was discharged in August 2016 for unsatisfactory performance. His family reportedly said he "lost his mind" after returning home.

Authorities say Santiago was hospitalized in November of last year after going to an FBI office in Anchorage, Alaska. He reportedly said he was hearing voices and that U.S. intelligence agents were forcing him to watch ISIS videos.

During the shooting, some passengers were evacuated onto the tarmac. Others were told to shelter in place inside the airport or inside planes on the ground. Santiago was taken into custody at the scene.

The airport reopened early Saturday morning and has set up a hotline for family and friends to check on loved ones.

Authorities said Saturday they didn't know the motive behind the attack. Multiple agencies, including the FBI, are assisting in the investigation.