At Least 6 Dead, 30 Wounded In Shooting At Chicago-Area July 4 Parade 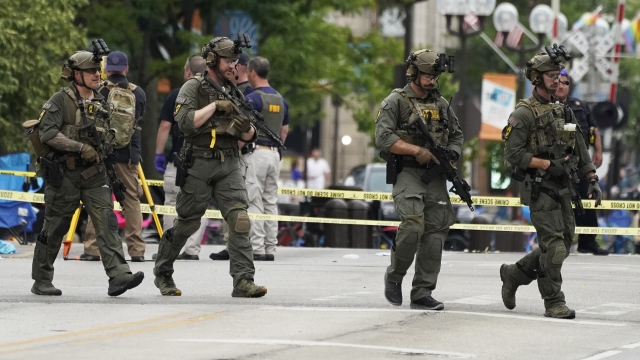 Authorities said a man named as a person of interest in the shooting was taken into police custody Monday evening after an hourslong manhunt.

A gunman on a rooftop opened fire on an Independence Day parade in suburban Chicago on Monday, killing at least six people, wounding at least 30 and sending hundreds of marchers, parents with strollers and children on bicycles fleeing in terror, police said.

Authorities said a man named as a person of interest in the shooting was taken into police custody Monday evening after an hourslong manhunt in and around Highland Park, an affluent community of about 30,000 on Chicago’s north shore.

The July 4 shooting was just the latest to shatter the rituals of American life. Schools, churches, grocery stores and now community parades have all become killing grounds in recent months. This time, the bloodshed came as the nation tried to find cause to celebrate its founding and the bonds that still hold it together.

“It definitely hits a lot harder when it’s not only your hometown but it’s also right in front of you,” resident Ron Tuazon said as he and a friend returned to the parade route Monday evening to retrieve chairs, blankets and a child’s bike that he and his family abandoned when the shooting began.

“It’s commonplace now,” Tuazon said of what he called yet another American atrocity. “We don’t blink anymore. Until laws change, it’s going to be more of the same.”

The shooting occurred at a spot on the parade route where many residents had staked out prime viewing points early in the day for the annual celebration. Dozens of fired bullets sent hundreds of parade-goers — some visibly bloodied — fleeing. They left a trail of abandoned items that showed everyday life suddenly, violently disrupted: A half-eaten bag of potato chips; a box of chocolate cookies spilled onto the grass; a child’s Chicago Cubs cap.

Highland Park Police Chief Lou Jogmen said a police officer pulled over the suspect about five miles north of the shooting scene, several hours after police released the man's photo and an image of his silver Honda Fit, and warned the public that he was likely armed and dangerous. Authorities initially said he was 22, but an FBI bulletin and social media said he was 21.

Lake County Major Crime Task Force spokesman Christopher Covelli said at a news conference “several of the deceased victims” died at the scene and one was taken to a hospital and died there. Police have not released details about the victims or wounded.

Lake County Coroner Jennifer Banek said the five people killed at the parade were adults, but didn’t have information on the sixth victim who was taken to a hospital and died there. One of those killed was a Mexican national, Roberto Velasco, Mexico’s director for North American affairs, said on Twitter Monday. He said two other Mexicans were wounded.

NorthShore University Health Center received 26 patients after the attack. All but one had gunshot wounds, said Dr. Brigham Temple, medical director of emergency preparedness. Their ages ranged from 8 to 85, and Temple estimated that four or five patients were children.

Temple said 19 of them were treated and discharged. Others were transferred to other hospitals, while two patients, in stable condition, remained at the Highland Park hospital.

“It is devastating that a celebration of America was ripped apart by our uniquely American plague,” Illinois Gov. J.B. Pritzker said at a news conference.

“I’m furious because it does not have to be this way... while we celebrate the Fourth of July just once a year, mass shootings have become a weekly — yes, weekly — American tradition.”

The shooter opened fire around 10:15 a.m., when the parade was about three-quarters through, authorities said.

Highland Park Police Commander Chris O’Neill, the incident commander on scene, said the gunman apparently used a “high-powered rifle” to fire from a spot atop a commercial building where he was “very difficult to see.” He said the rifle was recovered at the scene. Police also found a ladder attached to the building.

President Joe Biden on Monday said he and first lady Jill Biden were “shocked by the senseless gun violence that has yet again brought grief to an American community on this Independence Day.”

Highland Park is a close-knit community of about 30,000 people located on the shores of Lake Michigan just north of Chicago, with mansions and sprawling lakeside estates that have long drawn the rich and sometimes famous, including NBA legend Michael Jordan, who lived in the city for years when he played for the Chicago Bulls. John Hughes filmed parts of several movies in the city, including “Ferris Bueller’s Day Off,” “Sixteen Candles” and “Weird Science.”