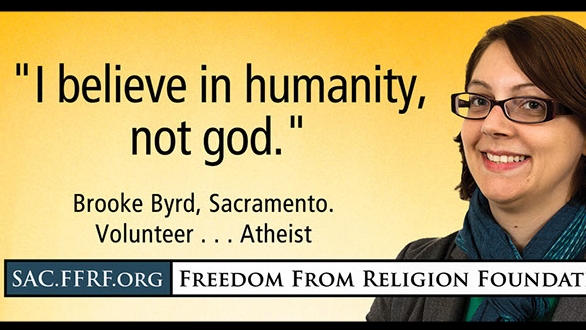 The group says the campaign isn’t about insulting religion, just dispelling myths about being an Atheist.

"Remember the reason for the season.” It’s a refrain often heard as Christmas approaches — but through a new billboard campaign, one atheist group is saying it’s okay if you don’t.

Atheists in Sacramento, California are now planning 55 billboards to pop up all over the city the day after Thanksgiving. (Via The Huffington Post)

“Here’s a look at one of them. ‘I believe in people, not gods.’ Another one says, 'I believe in one less god than you.’” (Via KTXL)

Other billboards, which quote local residents, will carry messages like “Doing good is my religion,” and “I don’t believe in Odin either.” (Via Freedom From Religion Foundation)

But the group says the campaign isn’t about insulting religion — just dispelling myths about being an atheist.

“This is not directed at people who enjoy their church, they enjoy their religion. That’s fine. But we’re talking to the people who don’t know that Atheism is okay.” (Via KXTV / USA Today)

For their part, religious folks aren’t taking the challenge lying down.

A group called Answers in Genesis posted this message in Times Square back in October. (Via Tablet)

And quoted by Fox News, one Sacramento bishop says people might be more religious than they might think. “While I’m not happy about these billboards, I am certain people still, when they look deep down in their soul and in their heart, find a spark. They believe in a higher power.”

Atheists though, take issue with that, and as of late have been speaking up.

Quoted by The Inquistr, the President of the Freedom From Religion Foundation said, “The whole month of December is taken over in a celebration of the religious beliefs, in particular Christianity, and it’s just as if the whole month turns non-believers into outsiders.”

Besides the billboards, atheists have been making their presence felt in other ways.

The same group erected this giant “A” for Atheism in Chicago’s Daley Plaza in protest of a religious display. (Via The Blaze)

And as the Daily Mail reports so-called "Atheist mega-churches" have begun to spring up across the U.S.

The group is calling the campaign “Out of the Closet.” It is funded by the Freedom From Religion Foundation.