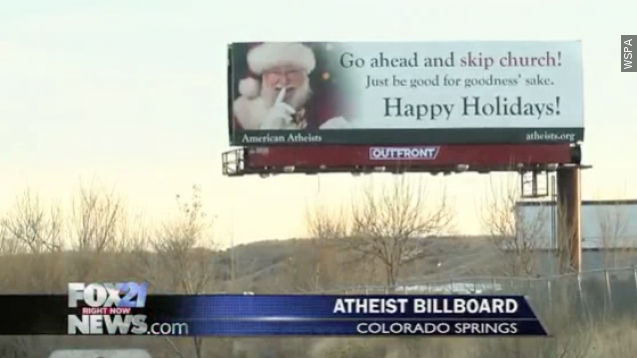 A billboard urging people to skip church has inspired some people to support highway ads with a counter-message.

The billboard, put up by the American Atheist group, reads, "Go ahead and skip church! Just be good for goodness' sake."

The ads, placed along highways in North Carolina and Colorado, have irked some people.

"It can be insulting to those who are religious and do celebrate it for Christianity and religion in general," said Alexis Esselman.

The group said it purposefully places billboards in areas where they might raise more eyebrows and start a discussion.

"We want it to be either a little funny, or edgy, or provocative in some way, so when people see it, they stop and go, 'Hey, wait a second; what did that just say?'" said Nick Fish, program director of American Atheists National.

Some people are firing back by donating to Signs of Christmas, an organization that puts up billboards featuring the nativity scene.