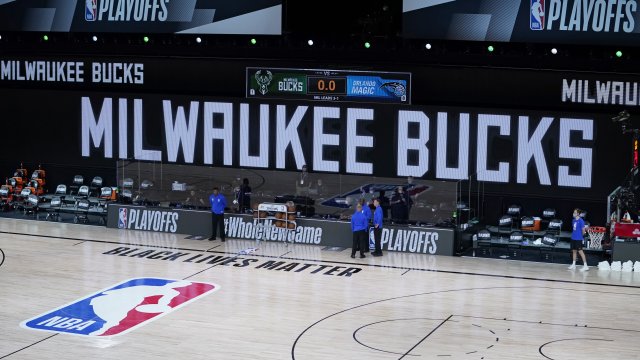 Numerous MLB, NBA, WNBA, MLS and NHL games have been postponed as athletes walk out in protest of the police shooting of Jacob Blake.

Multiple professional sports matches have been postponed after players decided not to play following the police shooting of Jacob Blake.

Players in the MLB, NBA, WNBA, MLS and NHL all went on strike with many saying there are bigger issues they need to focus on.

The strike began with the NBA's Milwaukee Bucks, who didn't take the floor for their playoff game on Wednesday against the Orlando Magic – with many other professional athletes following.

However, according to ESPN, the NBA players have decided to resume the playoffs, and the league is hopeful that games will happen on either Friday or Saturday.

He told CNBC: "With the NBA, I think there is a lot of activism and they've put a lot of slogans out, but what I think we need is to turn that from slogans and signals into actual action that's going to solve the problem."

Many leagues had already dedicated their seasons to highlighting social justice issues following the death of George Floyd while in Minneapolis police custody, with measures like letting players display causes on their jerseys. But it's still unclear just how long the strike will last.