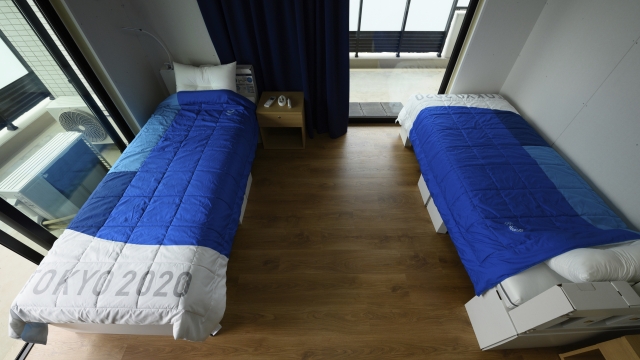 "Alright guys, I've been getting this question a lot, so I'm just going to show you the beds here in the Olympic Village," Erik Shoji, a volleyball player for the United States of America said.

Athletes aren't the only ones whose strength is being put to the test at the Olympic Games in Tokyo this summer.

"Everything is cardboard, so you might think they are not very sturdy. But Taylor is going to test them out. Let's see," Shoji said.

Athletes from all over the world are taking to social media to test out the durability of the Olympic Village beds, amid rumors they were constructed with cardboard to prevent participants from having sex.

"In today's episode of fake news at the Olympic Games, the beds are meant to be anti-sex. They are made out of cardboard, yes, but apparently, they are meant to break at any sudden movements. It's fake. Fake news," Rhys McClenaghan, a gymnast for Ireland said.

"That's Matty's bed. My bed. Here we go! Look! Bounce up and down," Tom Daley, a diver for Great Britain said.

But organizers for the games and the manufacturing company behind the beds say the cardboard design is for sustainability purposes.

"For everyone asking about the cardboard beds, they are made of cardboard. They definitely are and they're quite comfy. And they are made to be sustainable so they can recycle them after, and it's such an amazing idea for the games to come up with this," Kimberley Woods, a Slalom Canoeist for Great Britain said.

With that rumor firmly put to bed by officials and competitors, athletes can now turn their attention to a good night's rest ahead of the games.