Atomic Energy Inspectors Get Inside Nuclear Plant Targeted By Russia 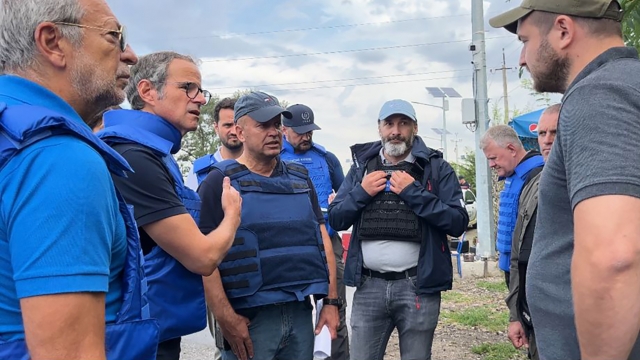 After months of negotiations, a 14-member team toured Europe's biggest nuclear plant after accusations of heavy shelling from both sides.

As people across Ukraine try to return to normal as best they can, there remains ongoing concerns surrounding the largest nuclear power plant in all of Europe.

On Thursday, inspectors from the International Atomic Energy Agency made it to the plant after a 70-mile journey from Zaporizhzhia in Ukraine through a war zone.

A full assessment of how great the risk of a nuclear accident is hasn't yet been made clear. As the experts made their way toward the complex, Russia and Ukraine accused each other of shelling the area and trying to derail the visit. The heavy shelling delayed the team's progress toward the plant.

Once there, the bulk of the team stayed there for around three hours. Later in the day, video emerged showing the inspector team walking past what appeared to be Russian military vehicles.

A European nuclear power plant was forced to use a backup generator. If it had failed, it could have caused a radiation emergency.

The director general of the agency, Rafael Grossi, described the day.

"Of course there is a lot more to do," he said. "My team is staying, and most importantly we are establishing a continued presence from the IAEA here."

Energoatom, Ukraine's state nuclear power company, said Russian mortar shelling had led to the shutdown of one of its reactors by its emergency protection system and had damaged a backup power supply line used for in-house needs. One of the plant's reactors that wasn't operating was switched to diesel generators, Energoatom said.

The director general of the International Committee of the Red Cross said there would be "no possible humanitarian response if there were a nuclear accident."