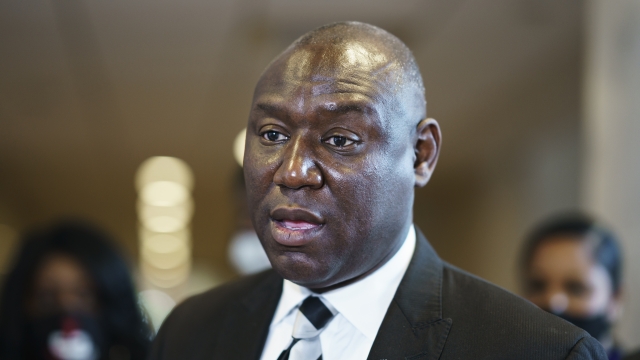 The civil rights attorney is representing Ahmaud Arbery's father, as well as the family of the 9-year-old injured at the Astroworld Festival.

NEWSY'S CHANCE SEALES: Hundreds of people were treated for injuries on site that night [at the Astroworld Festival in Houston]. At least 13 people were hospitalized and that includes 9-year-old Ezra Blount. Ezra remains in a medically induced coma Wednesday evening. Doctors say the little boy has damage to his heart, his lungs and his brain. His dad was carrying him at the time when he passed out in the large crowd and when he became conscious, Ezra was nowhere to be found. The attorney representing Ezra's family joined us Wednesday night. He also represents families in several other high-profile cases. Benjamin Crump, thank you for taking the time.

BENJAMIN CRUMP: Thank you for having me, Chance.

SEALES: How is Ezra tonight?

CRUMP: Well, he's still on life support and he's still fighting to survive, so his family has asked everybody to continue their prayers.

SEALES: At this time my understanding is he's in a medically induced coma but his organs are struggling — it sounds like multiple systems?

CRUMP: Yeah, he suffered catastrophic injuries at the Astroworld Festival. He was with his father. His father had him on his shoulders. Tragically, because the people are so closely packed and people rushing the stage, his father passed out and the nine-year-old child was caught up in the melee and trampled and has suffered severe injuries to his kidneys, to his lungs and to his brain.

SEALES: My goodness. We are getting some more information at this point, Ben. A few reports have surfaced with possible legal implications including in lawsuits like the one filed by the family. I want to get your take on this: For instance, Houston's fire chief says they were part of the security planning process throughout but the local union leader of the firefighters claims there was no direct radio communication that night with organizers, or very limited. They were supposed to use cellphones. Cellphones don't work in the middle of 50,000 people. Do you have any clarity about who was in charge? Who was responsible for safety?

CRUMP: We do not, but we have retained a safety expert, a crowd overflow expert and an accident reconstructionist expert. One of the reasons we filed our lawsuit was not only to get justice for those injured Individuals that we represent, which is about 200 at this time, but also to be able to get our independent experts on the crime scene to collect evidence.

SEALES: I see. What sort of evidence are you looking for? I've seen a few people come out and say, "I was hired as a security guard. I turned around and left because they weren't telling me what to do. I thought this could be dangerous." And if they were saying that before this ever occurred, what sort of substantiating evidence are you looking for?

CRUMP: Well, we believe that there was negligence and malfeasance on every level. We've sued 20 defendants now and we think that number will continue to grow because when you really think about it in the simplest aspects of what happened that night, when people first started passing out, people first started being trampled, they started getting 911 calls around 9 p.m. and it wasn't until 9:45 or later that they finally stopped the concert. How many people in that 45-minute span lost their lives because somebody did not have the conviction to say, "Stop this concert now. People are getting injured. People are dying."

SEALES: Tuesday night on the show, I spoke with Thomas, J. Henry, a lawyer in Texas representing about 200 people as well. He puts the blame on Travis Scott and Drake, among others, who were performing. Let me just play a clip for you real quick.

SEALES ON TUESDAY: Are you saying you want Travis Scott and Drake drug tested?

THOMAS J. HENRY ON TUESDAY: I think they should be drug tested. I think that they should absolutely be put under a microscope to determine why, for that long period of time, did they not perceive, "I need to shut this down."

SEALES: The performers claim they did not know how bad it was at that time. Do you hold Travis Scott and Drake responsible? Do you want them drug tested?

CRUMP: Well, I think we should do a thorough investigation, but I think the biggest culprits here are Live Nation and the organizers — the people who do this every day, all day, all over the world and so we want to not just say it's individuals. We think that this is the corporations, the institutions that are responsible for this because they are the people who literally set what the procedures are going to be for crowd control, for medical intervention and also for safety. And so, we believe the elements are there that will demonstrate, "We could have prevented this." Chance, people lost their children. This was completely preventable. We have to make sure nothing like this ever happens again.

SEALES: Specifically in Ezra's case — because you think of this little boy and you just feel awful for the family, for this kid, everybody's praying he pulls through and lives a life that's healthy — when you take this to a jury, is that the plan or are you angling for a settlement? How much would be reasonable in a case like that? Because it's hard to put a dollar amount.

CRUMP: You're right. It's just tragic beyond imagination. We always take cases and we prepare for trial. If the corporations and the insurance companies and our clients can agree on a settlement before we get to trial and that makes our clients feel fulfilled and that justice was served, then we encourage it. However, we understand that the best way to make them settle is to know that we're going to trial and there's going to be hell to pay once we get in that courtroom for their negligence that caused these catastrophic injuries to that young child who never is going to be the same, if he survives.

SEALES: Let me ask you tonight about Ahmaud Arbery. You represent his father and in Georgia right now, the three men involved in the pursuit and shooting of Ahmaud are on trial. What do you think so far of the prosecution's case?

CRUMP: Well, I believe the evidence is overwhelming. The fact that we have video and the fact that we have audio where we don't have to speculate as to what happened, we believe it is clear-cut. The only issue here Chance — and I believe we have to always speak truth to power — the only issue here is that Ahmaud Arbery was an unarmed Black man who was killed by three White men and so people are wondering: Will they get justice? If the roles were reversed, and this was a Black father and son chasing a young White man and killing him and we see it on video and we hear what they're saying, nobody would say, "Well is this a case of self-defense?" We would all say, "Bloody murder" and make sure they were held fully accountable. But when we're in America, we have to deal with this. I mean when you listen to the evidence, the father said, "We're gonna blow your f'ing head off" and then they shoot and kill Ahmaud and we're scratching our heads saying, "Oh is self-defense viable?" After seeing that and hearing that? It's only because we seem to have two justice systems in America, one for White America and another for Black Americans. We have to fight to get equal justice for all citizens in America.

SEALES: You say that the video of the circumstances tells the whole story. They're cut-and-dried. But let me present a few more facts to you and get your response. The neighbor who called the police said Ahmaud had entered a nearby construction site several times. He had his eyes on him. Another neighbor identified him as the person who stole expensive equipment in the past from a home. The McMichaels were aware of this before this incident occurred under the — now reformed — citizen's arrest law, they only needed a reasonable suspicion a felony was committed. Considering what they knew going into that, the defense feels that that is reasonable.

CRUMP: Again, there are two justice systems that operate in America and we have to always be honest. There were several White citizens who entered that house and we have presented video even before the trial, but even the prosecutor during the trial showed all these White people going in the house — nobody chased them. Nobody went and said that they had stolen anything. The first minute that police arrived on the scene, Ahmaud Arbery was presumed guilty and the White men who killed him were presumed innocent. That is a problem because if the roads would have been reversed, nobody would have presumed that a Black father and son killing an unarmed White man were innocent. I mean they came on the scene, Chance, and Ahmaud's leg was still moving as he had been shot and nobody offered medical assistance. They went to ask the White man who had shot Ahmaud Arbery, "Are you all OK? Are you all all right?" What about the young Black man who's lying on the ground dying?

SEALES: It will soon be in the hands of a jury. You're involved in several really difficult cases with families looking to you. I appreciate you taking the time to speak with us here at Newsy in the midst of all that.

CRUMP: Thank you for having me, Chance.