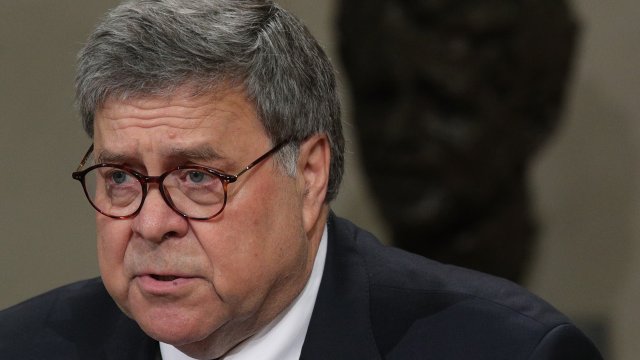 Earlier this month, the Trump administration deemed immigrants traveling through another country before reaching the U.S. ineligible for asylum.

The Trump administration rolled out another restriction on asylum cases.

It makes it harder for asylum-seekers to claim they are persecuted because of family ties.

Attorney General William Barr set the restriction after overruling a Board of Immigration Appeals decision Monday.

The case involved a Mexican man, known as L-E-A in court documents, applying for asylum.

L-E-A claimed a drug cartel threatened his family after his father refused to allow it to do business from his store.

According to the Immigration and Nationality Act, asylum seekers can say they have a "well-founded fear of persecution on account of race, religion, nationality, membership in a particular social group, or political opinion."

L-E-A argued his membership in a particular social group was "the immediate family of his father."

The board denied the asylum application because it didn't see the necessary connection between the alleged persecution and his family.

Attorney General Barr, on the other hand, did.

He wrote in a summary, "What qualifies certain clans or kinship groups as particular social groups is not merely the genetic ties among the members."

He continued on to say, "There is no evidence that Congress intended the term 'particular social group' to cast so wide a net."

This doesn't mean all asylum cases involving family ties are a no-go, but they are severely restricted.

Barr wrote: "Unless an immediate family carries greater societal import, it is unlikely that a proposed family-based group will be 'distinct' in the way required by the INA for purposes of asylum."

The Justice Department has jurisdiction over U.S. immigration courts.

This allows an attorney general to intervene in cases and set national legal precedent.