Austin Is Cutting $150M From Its Police Budget To 'Reimagine' Policing 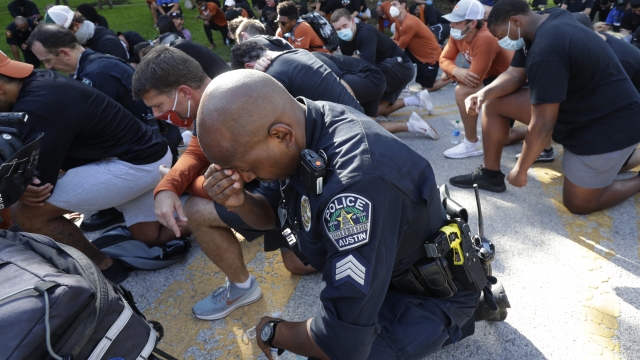 Texas' capital is making one of the most drastic local police budget cuts in the country — over the objection of Texas' governor.

In reaction to protests and civil unrest, several cities across the country have reduced their police departments' budgets, but in Texas the state capitol is making one of the most drastic police budget cuts in the country.

These cuts are being made over the objection of Texas' governor, lieutenant governor and both leaders of the Texas legislature.

The Austin city council plans to cut $150M from its police department's budget — reducing the overall budget by a third compared to last year.

In response to these budget changes, Texas Gov. Greg Abbott says he plans to freeze property tax revenues for Austin and any other city in Texas that defunds its police department.

ABBOTT: "Cities that endanger residents by reducing law enforcement should not then be able to turn around and then get more property tax dollars from those same residents whose lives the city just endangered."

And while there's no legislation on the table yet, Republicans control the Texas House and Senate, giving it a quick path to Gov. Abbott's desk.

The $150 million breaks down into three major categories — immediate reinvestment, a 'reimagining safety' fund and decoupling services from APD.

There's about $80 million that isn't being cut or redistributed — it's just not going to be part of the Austin police budget. Over the next year, services like the 911 call center and forensic sciences will be phased out of APD's control.

But there's another $20 million being immediately stripped from the police department by cutting overtime, canceling cadet classes and other measures.

The last set of funds, about $50 million, is APD funding the city plans to divert towards "alternative forms of public safety."

Police programs like park patrol and traffic enforcement will be reviewed and potentially taken over by other sections of the city's government. Some will be replaced entirely.

CASAR: "What things are police responding to that we don't need them responding to? Why do we need police in riot gear and on horses spending overtime dollars, going into protests, when maybe we could have civilians taking care of that situation. Then we wouldn't see the escalation that we see. And it would be safer for everyone."

To be clear though, that money hasn't been moved or cut just yet.

While Austin is the only major city in Texas planning to reduce its police budget, there are several police departments across the country dealing with cuts.

Seattle, Minneapolis and Baltimore are all giving less money to their local PDs in the coming fiscal year, though the cuts aren't nearly as significant as what Austin plans to do.

New York is maybe the only city with such a sizable percentage of its budget being cut. New York shifted a billion dollars away from its police budget with more than $400 million of that going into youth and social services programming.