Australia Has A New PM, So Will It Get A New Climate Policy? 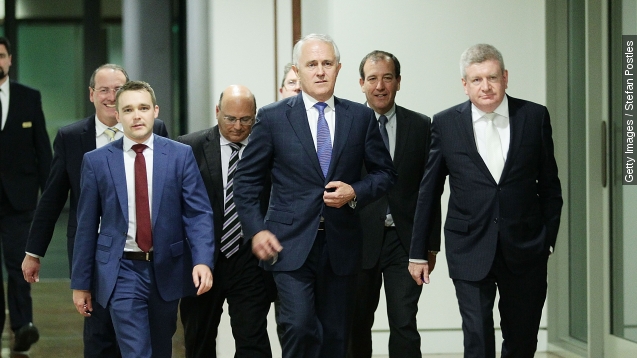 Tony Abbott was vilified for a lax climate change policy while Malcolm Turnbull called it "the ultimate long-term problem." Should we expect change?

"There's no longer a green veto on development," Tony Abbott said in June.

In his two years in office, he scrapped a carbon tax and cut back on a program that loaned money to green energy companies.

"When I've been up close to these wind farms, there's no doubt that not only are they visually awful but they make a lot of noise," Abbott told an Australian radio program earlier this month.

And he's planted his flag firmly on fossil fuels.

Malcolm Turnbull, Australia's new prime minister, has been painting himself as Abbott's opposite on the environment for years. He wrote a 2009 article claiming "Abbott's climate change policy is bulls***" — that's the actual headline — and followed that up with another opinion piece a few months later calling climate change "the ultimate long-term problem."

So you might think Australia's climate policy is due an about-face, but remember: This was a party leadership battle and not an election, so it's hard to predict whether Turnbull will even attempt any major policy changes.

After winning the leadership fight, Turnbull praised the Abbott government's climate policy and said he wouldn't be changing it any time soon.

"Policies are reviewed and adapted all the time, but the climate policy is one that, I think, has been very well designed," Turnbull said.

That's particularly important because the U.N.'s big climate change conference in Paris is just a few months away. Leading up to the conference, many countries, Australia included, are pledging to cut emissions. (Video via CNN)

But the Abbott government's target has been criticized as weak, and there's no sign Turnbull will make it any stricter.

The climate optimists are holding out some hope that Turnbull will change things behind the scenes, though. An analyst for The Guardian said Turnbull is "going to have to pretend he likes the government’s climate change policy" for now, and a writer for Mashable said a Turnbull government will be more ambitious in the Paris conference's back-room dealings, "which are at the heart of these U.N. negotiations anyway."