To Save The Great Barrier Reef, Australia Might Try Cooling It Off 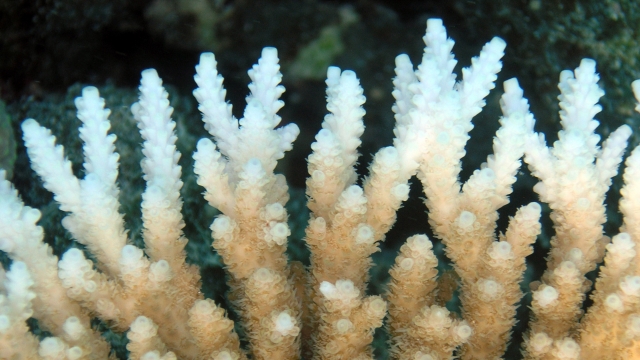 There's a proposal before the Australian government to try pumping cold water onto parts of the reef to prevent bleaching.

Coral bleaching at the Great Barrier Reef has gotten so bad, Australia may pump cold water from deep in the ocean to cool it off.

The plan would try to save around six reefs that are environmentally and economically valuable in northeastern Australia.

The Great Barrier Reef has experienced bleaching last year and this year due to warmer waters, so cooler water might do the trick.

Last year, parts of the Great Barrier Reef lost as much as 67 percent of its coral due to bleaching. Other sections lost only about 6 percent.

Staghorn coral, one of the most common components of the world's coral reefs, can't cope with the human-driven changes affecting the oceans.

Coral bleaching occurs when water temperatures in the reef are too hot or too cold for corals. They expel all the algae the corals feed off of and the corals turn white. Corals can survive bleaching events, but they do have higher mortality rates during them.

But some scientists aren't convinced the plan will work. At best it could save a few patches of reef, at worst it might end up hurting the reef even more.

Scientists have concluded there's only one way to really and truly save the Great Barrier Reef and that's a reduction in global warming — and soon.

The new plan has been submitted to the Australian government but hasn't been approved yet. It would cost around $9 million Australian dollars.