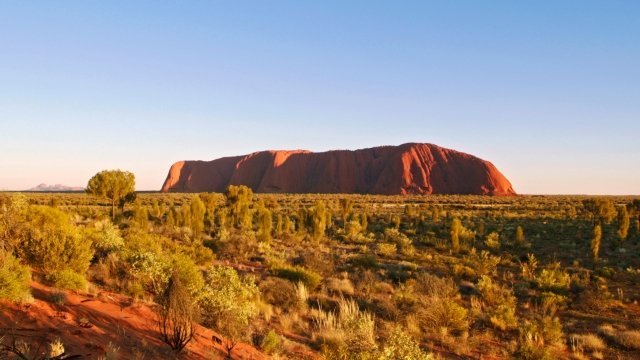 Uluru, an iconic rock formation in Australia, is considered sacred to local Aborigines.

About two years from now, tourists won't be able to climb an iconic rock formation in Australia.

Uluru, also known as Ayers Rock, is in Uluru-Kata Tjuta National Park — that's about in the middle of the country. Local Aborigines consider the remote rock sacred.

Because of that significance, the park's board voted unanimously Wednesday to ban people from climbing Uluru.

Parks Australia says more than 250,000 people visit the park each year. Visitors are already asked not to climb Uluru out of respect for local law and culture, but it's not explicitly prohibited.

The episode teaches young viewers not to be afraid of spiders, but some parents in Australia don't want their children to learn that.

In July, authorities in Myanmar established a similar ban on climbing historic temples in the ancient city of Bagan. The temples are seen as holy sites.

And in the U.S., visitors are asked to stay off the Devils Tower National Monument in June each year "out of respect for traditional cultural activities of American Indians."

Because of an agreement with Australia's tourism industry requiring at least 18 months notice, the Uluru climbing ban will officially start in late October 2019.