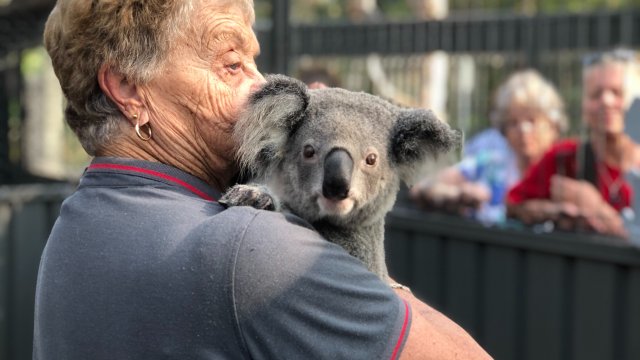 Terace Garnier spoke to two workers who are helping care for koalas injured in Australia's bushfires.

Thousands travel each year to Port Macquarie, a city known for its beautiful beaches. But in the midst of Australia's worst-ever fire crisis, people are seeing something very different.

"It's just devastating — what they have done to the whole population in Australia," said Barbara Barrett, a relief supervisor at the Port Macquarie Koala Hospital. "It's wiped out so many."

Barrett and Anne Walsh have worked with the Port Macquarie Koala Hospital for more than 35 years combined, caring for injured or sick koalas brought to the facility. They say nearly 500 koalas lived in the area — 400 of them were killed by recent bushfires.

"I have become so passionate about them that I think the day we have no koalas in Port Macquarie, I would pack my bags and leave," said Walsh.

They have saved 31 badly injured koalas since October. They work in the first facility in the country dedicated to treating the mammal. It has eight intensive care units and a 24-hour rescue operation. One koala, named Zenani, was injured during a bushfire seven years ago. Barrett spent months raising the koala, known as a young joey, in her home. Now she is the only one Zenani trusts.

Once a healthy baby koala is old enough, it will be released back into the wild. But some are too badly injured, like Zenani, and will spend the rest of their lives in captivity. "We could breed with her," Barrett said. "But because she came from a different area, three hours south of here, to breed with her we would have to have a male from that area. We don’t cross the gene pools. We try to keep them pure.”

The hospital plans on using donations they have received from around the world to start a breeding program. “It's going to take years and years to repopulate,” Barrett said.