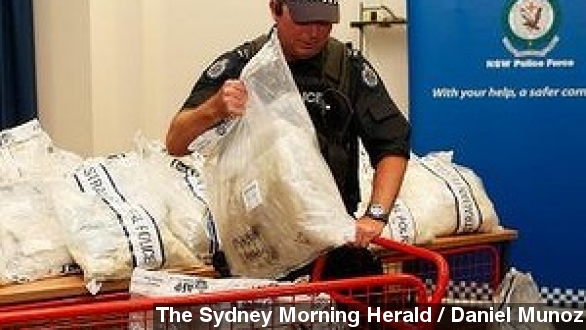 A group of authorities in Australia arrested six men in connection with the country's second largest drug bust in history.

One and a half billion dollars — that's the value of the nearly three tons of drugs Australian authorities seized this week during the county's second largest drug bust in history.

To be exact, police discovered 1,917 kilograms of MDMA, the chemical used to make ecstasy, along with 849 kilograms of meth — the largest meth bust in Australian history.

"You can't import nearly three tons of narcotics in this country without a large and sophisticated operation and this obviously has linkages over seas that will, I'm sure, take us into Europe and parts of Asia," said Australian Federal Police Commissioner Andrew Colvin.

The bust was reportedly part of a long running investigation involving about five national and international organizations creating the Joint Organized Crime Group. The shipment came in a single consignment concealed inside furniture that was sent over from Germany. Authorities had word of its arrival before it got to Australia.

"Police delivered the shipment to an address at Blacktown at Sydney's west. ... Six Australian men were arrested after they were allegedly caught trying to access the drugs," reported ABC Australia.

Police say they expect more arrests to be made as the investigation continues. This bust is being haled as a huge step forward in the fight against drugs in the country which, according to the United Nations Office on Drugs and Crime, has one of the highest numbers of illicit drug users in the world.

Check out this graph from the UNODC 2014 world report. It shows Australian women are the most likely to use both pharmaceutical and illicit drugs, while men are only second to those in the United States.

The New South Wales Police Commissioner explained to The Sydney Morning Herald, "The amount of drugs that we consume as a nation is something that is disturbing. ... This is a national problem. It has gone beyond the cities, it is now right across the towns."

The investigation is still on going but authorities report the amount of MDMA seized was enough to manufacture more than 10 million ecstasy pills.

This video includes an image from Psychonaught / CC0 1.0.