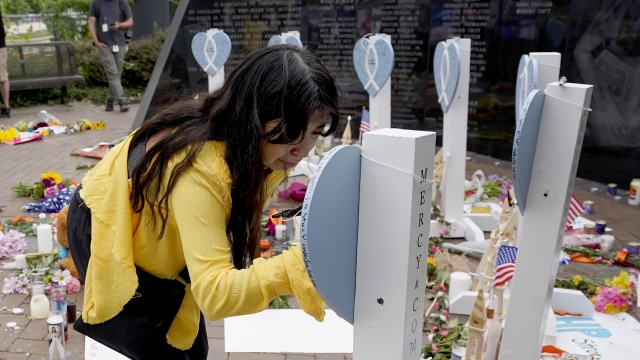 Investigators said they were called in 2019 for an attempted suicide, and in September that year police removed knives from the suspect's home.

While the Highland Park community grapples with the aftermath of a July 4 celebration-turned-mass shooting, the suspected gunman appeared in court, charged with seven counts of murder for the lives lost, with dozens more charges expected for the dozens more injured in the attack.

Investigators found 83 shell casings after the suspect dressed up in women's clothing in an attempt to blend in. Investigators said he contemplated a second attack on a celebration in Madison, Wisconsin.

Investigators continue to work to piece together what allegedly led the suspect along this violent path.

"His motivation isn't necessarily clear. I don't want to go specifically into what he told investigators, however he had some type of affinity towards the number four and seven and inverse was seven four," said Chris Covelli, deputy chief of the Lake County Sheriff's Department.

But in years prior, social media showed disturbing videos and police detailed two prior incidents.

Investigators said they were called in 2019 for an attempted suicide, and in September that year police removed knives from the home; after a report the suspect said he was going to kill everyone. There were no arrests, complaints, or firearms restraining orders under the state's red flag laws, but they notified state police of the incident.

"So he didn't have a pending application, so there was nothing to review at that time when we got that identification. We didn't know a few months later something else would happen," said Delilah Garcia, a Sergeant with the Illinois State Police.

But just months later, state police said an application for a firearms owner's identification card was sponsored by the subject's father.

State police state in part, "at the time of FOID application review in January of 2020, there was insufficient basis to establish a clear and present danger and deny the FOID application."

"This is obviously a glaring problem that this situation speaks to that I am going to dig into. I don't know all the facts yet. I will be working with the state police. We are going to look very closely at the law and the procedure for getting the card and make sure there wasn't a mistake that happened and if there is a loophole, we're going to fix that," said Illinois state senator Julie Morrison.

There were few details offered by investigators on the suspect's father.

When asked by Newsy about the parents, authorities said, "I don't want to comment on that. I don't want to answer that question right now in terms of what our work continues to be to look at all of the information and evidence in this case."

But in this tight-knit community questions loom. A community mourns and some call for change.

Paul and Vicki Morton are community members of Highland Park.

"You know, one of the oldest victims or people that passed was in his 80's. And that man has lived for 88 or so years on this planet. And he's probably had so many great times, and it's probably so important to so many people. And he's gone. And then the children. So it's, it's, it's just so sad to think about the impact on these lives," Paul Morton said.

"And I, I think there's a lot of anxiety that people have, and, you know, how's this going to impact the children and it's the town, which is forever changed and not naive anymore," Vicky Morton said.