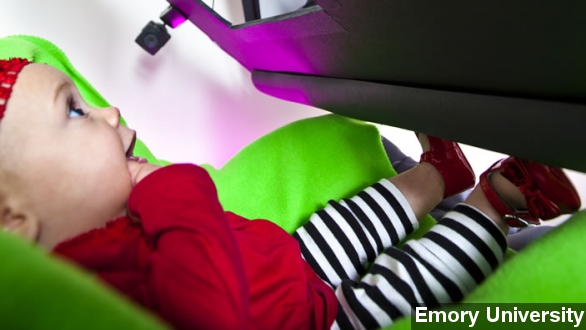 Researchers found children who were diagnosed by age 3 demonstrated less attention to eye contact in tests performed when they were babies.

A baby's eyes might hold the keys to the earliest test for autism yet.

Researchers at Emory University in Atlanta found signs of autism in babies as young as 2 months old, all by tracking where the infants were looking.

"We measure what babies see and what they don't. And we do this using eye-tracking technology. And we measure the movements of a baby's eyes while the baby watches scenes of social interaction." (Via WSB-TV)

Babies who paid the least attention to eye contact over the course of the test were more likely to be diagnosed with autism later on. Avoiding eye contact is a hallmark of autism. (Via Autism Speaks)

The disorder usually isn't diagnosed until age 3 or 4, with the earliest diagnoses coming around the 18-month mark.

Doctors say the earlier a child is diagnosed, the more effective treatments can be. Currently there's a big scientific push to figure out the best ways to detect the disorder early. (Via BBC)

But that doesn't mean parents should start trying to diagnose eye contact themselves. A CNN correspondent says the test can't be done without sensitive equipment.

"You can't, and I would hate to think if someone is watching this now and is holding their little baby and saying 'Oh, is their eye tracking right?' You can't see this with the naked eye. This is something where you'd have to use that technology."

The new technique is a long way from practical use in clinics, but according to the National Institutes of Health, the researchers have already begun recruiting for more clinical studies to help make the technique more precise.