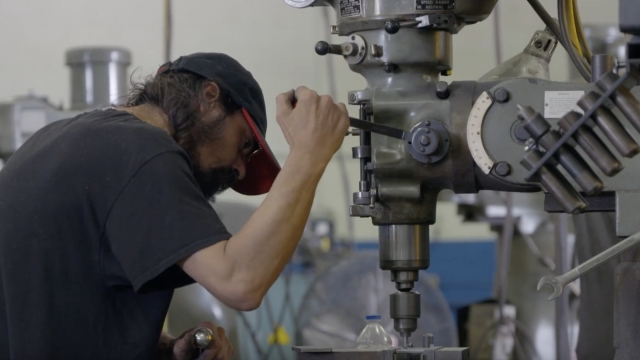 The jobs that automation creates in fields like software and engineering may not even come close to replacing the jobs lost.

For Americans across the Rust Belt, automation is the new reality. Many jobs traditionally done by people are already being replaced with machines.

In fact, automation has been the name of the game in his family's business for 33 years. Jerry Duda opened A + J Automation with his father, Adam, in the late '80s, when the "original automation boom," as he calls it, began. His job is design and quality control — to make sure other companies produce their parts correctly. His nine employees design and build automated assembly lines and test equipment for their customers.

He says it's not a question of whether companies want to embrace automation.

"They almost have to do that because if they don't, what happens is they will not be able to produce the product fast enough and at a rate their customers can afford," he said.

A recent Brookings study found 640,000 jobs in the Detroit metro area are at high risk for automation in the next decade. That's about a quarter of the jobs in the state. Even though people like Duda are creating jobs in automation, most studies have found it's not enough to replace the jobs that will be lost.

Duda says a mistake on a single stud for a specific part could cost $5,000-$10,000. A handful of mistakes is equivalent to the cost of the machine.

He says companies typically see payback on his equipment within a year, and the machine lasts 5-7 years. Companies like his saw the automation trend coming. So they were prepared. In fact, Michigan is ahead of other manufacturing heavyweights including Indiana, Ohio and Kentucky, because it's diversified its workforce.

A recent Pew study says 6% of Americans have already felt the impacts of automation, whether by lost wages or by losing their job altogether. But Duda says there is a way to keep up with the changing demand of this industry.

"We need more people in technical schools that will do the programming, writing or do the design. And you don't necessarily need to go to a four-year college to do that. In fact, it's probably the wrong place to go," he said.

Many of Duda's employees have been with him for decades. He says a new generation needs to come in and learn the skills of the future. Because the reality is they don't have much of a choice.

"If they don’t embrace it, they'll never be able to keep up with the cost reduction," he said.