Baltimore Has Homicide-Free 11 Days After Record Violence In 2017 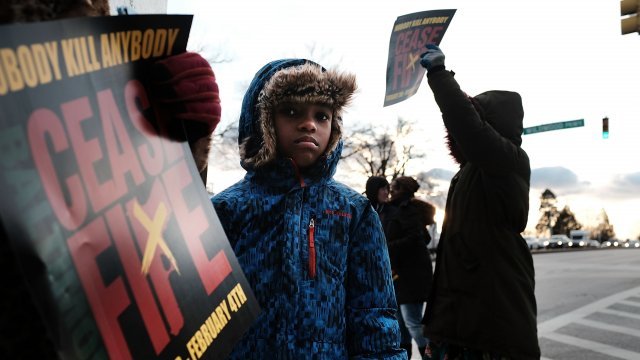 Baltimore ended 2017 with the highest murder rate in the city's history. But this community-led initiative has had a serious impact in 2018 — so far.

The city of Baltimore ended 2017 with the highest murder rate in the city's history and one of the highest in the country — nearly 56 killings per 100,000 people. But a month and a half into the new year, the Maryland city has gone a full 11 days without a homicide.

Police attribute the drop in crime, at least in part, to the additional police added to the force and new "predictive crime software" being used.

The halt in homicides coincides with a cease-fire called by community members.

"Only 11 people came to the first meeting in May, and now it's hundreds and hundreds of people from all over the city," Erricka Bridgeford said.

Bridgeford is the organizer of the Baltimore cease-fire efforts. This is the most successful campaign she's had so far.

The city is currently tracking well below the homicide rate for last year, with just 27 so far in 2018 compared to 45 homicides this time last year.