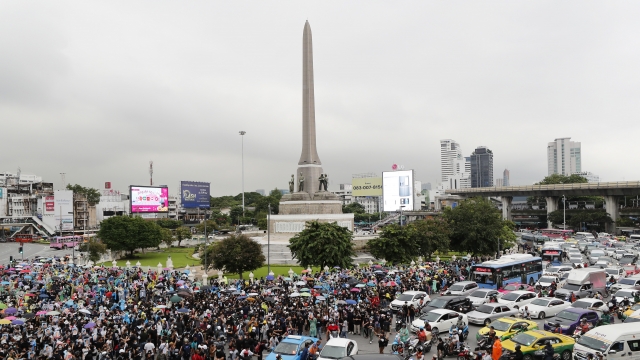 Some groups chanted "down with dictatorship" and "reform the monarchy" while others held up photos of some of the 80 arrested protesters.

Thousands of youth-led, anti-government protesters took to the streets of Bangkok for the fifth consecutive day Sunday despite a crackdown by the city's government.

Some groups chanted "down with dictatorship" and "reform the monarchy" while others held up photos of some of the 80 protesters that have been detained in the last five days.

The government banned gatherings Thursday and threatened jail sentences of up to 15 years for anyone insulting the king during their demonstrations. Police used a water cannon Friday to try to disperse gatherings amid the emergency decree banning them. While Saturday's and Sunday's protests were more peaceful with no reports of clashes, authorities' previous use of force sparked more to join rallies.

Protesters are pushing for a dissolution of parliament and a curb of the palace's power. They're also calling for the resignation of Prime Minister Prayuth Chan-ocha, who was elected in 2014 and gave the military the power to appoint a 250-member Senate. Now protesters want a new constitution — one the military has no hand in creating.

Groups have been using social media to assemble meetings before police can block them. Bangkok's transit system was shut down Saturday in an attempt to thwart protesters' plans to meet at Skytrain stations, though they were still used as assembly points across the city. Now the government is planning to take legal action against those using Twitter and Facebook to announce the demonstrations.