Banking Culture Is As Dishonest As You Think, Science Says 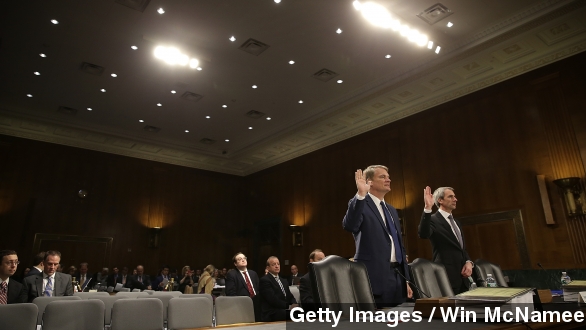 In the same week the Senate opens hearings on manipulation of markets by banks, a new study finds the banking industry has a culture of dishonesty.

The idea that the financial sector can be dishonest is often reinforced in pop culture. But there hasn't been scientific evidence to support it— until now.

In a study published in the journal Nature, Swiss economists asked 128 employees of a large international bank to perform a coin tossing experiment that measures honesty. The toss included financial incentives.

The study found when employees were reminded of their professional identities as bank employees, "a significant portion of them became dishonest." The same result was not found with employees from other industries.

In the U.S. — the study's release is coincidentally timed.

A Senate panel began hearings Thursday that include top executives from Morgan Stanley, Goldman Sachs, and JPMorgan Chase following a two year investigation into the alleged manipulation of commodities markets. (Video via CNBC)

In his opening remarks at the hearing, Senator Carl Levin said, "Their activities raise significant questions about whether banks are profiting at the expense of end-users."

A report following that investigation recommended the Federal Reserve impose a limit on how much banks can participate in physical commodities.

But Fed oversight of large banks has itself been called into question recently.

News broke on Thursday morning two Goldman Sachs bankers had been fired after one of them allegedly brought secret documents to the firm from the New York Federal Reserve Bank.

That brings further questions about the seemingly too cozy relationship between Goldman and the Federal Reserve Bank of New York.

That relationship was already in question following secret tapes released by ProPublica and This American Life. The tapes showed now-fired New York Fed examiner Carmen Segarra clashing with her bosses over her report claiming Goldman Sachs lacked a company-wide conflict of interest policy.

"She, you know, took these tapes and made them public and she turns out to be the only person in this organization who was willing to stand on principal," Matt Taibbi said on MSNBC.

Which brings us back to that Swiss study. The economists who conducted the honesty experiment in bankers suggest having bank employees take a professional oath, similar to the Hippocratic Oath for physicians, could promote a more honest bank culture.