Bannon Reportedly Talks To Mueller's Team, Not So Much To House Intel 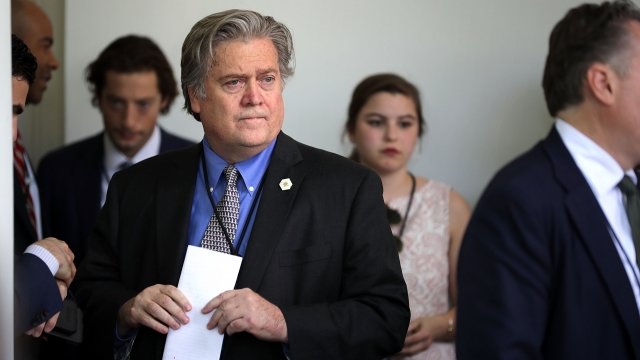 Steve Bannon reportedly spent 20 or so hours with Robert Mueller's team but wasn't as forthcoming during his House intelligence committee interview.

But the former chief strategist reportedly wasn't as cooperative with the House intelligence committee this week.

During an interview, Bannon told the committee he'd been instructed to invoke executive privilege on behalf of President Donald Trump. He would only answer 25 questions approved by the White House.

Bannon came under fire recently due to comments attributed to him in the book "Fire and Fury: Inside the Trump White House."

Lawmakers are trying to decide whether to hold him in contempt.

Bannon's tight lips have been an issue in the past. In January, Bannon reportedly gave very few answers when he testified behind closed doors with House intelligence committee members for over 10 hours.