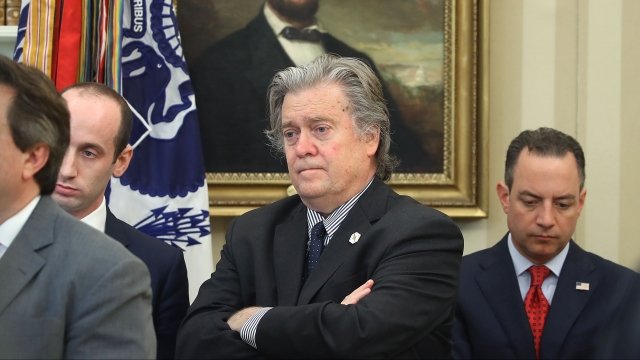 Multiple news outlets report the House Intelligence Committee and the White House haven't agreed on what questions Bannon can answer.

Former White House chief strategist Steve Bannon is scheduled to return to the House Intelligence Committee under subpoena Tuesday, but he's reportedly not expected to show up.

Unnamed sources told multiple news outlets Bannon's reason for skipping is because the committee and the White House have not come to a consensus on what topics the former head of Breitbart News can be questioned about.

Bannon's previous testimony before the committee in January lasted more than 10 hours. But he reportedly gave very few answers, even after the committee issued him a subpoena on the spot to compel him to talk.

That's because the White House reportedly ordered Bannon not to talk about his time working on the Trump transition team and in the West Wing.

Rep. Mike Conaway, who's the Republican leading the committee's Russia investigation, told reporters Monday he was "not aware of any executive privilege" being invoked that would limit what Bannon could tell the panel.

If Bannon does not show up Tuesday, lawmakers could vote to hold him in contempt.