Trumps Announce Which School Son Barron Will Attend This Fall 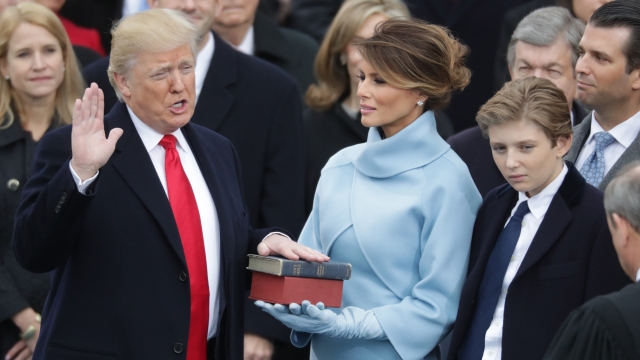 Barron Trump will move to Washington, D.C., this summer and enter the sixth grade in the fall.

President and Mrs. Trump will follow in the footsteps of the Obamas and Clintons in sending their son to a private rather than public D.C.-area school.

He will be the first president's child to attend the school, which was founded in 1978.

The campus Barron Trump will attend is about 15 miles from the White House and appears to be located in a residential area.

According to its website, St. Andrew's has a total enrollment of 580 students.

The cost of protecting the pair in New York hasn't sat well with critics.

Barron Trump will be a sixth-grader in St. Andrew's middle school in the fall. The middle school boasts a median class size of 15 students.

The school — which has its own research arm in the field of "Mind, Brain and Education Science" — boasts that it has the "most research-informed faculty in the nation."

In a letter to parents obtained by The Washington Post, administrators said they are working "directly with the Secret Service to ensure [the campus's] logistics and security will continue to work smoothly and discreetly next year for all of our students and families."

The Obamas sent their two daughters to Sidwell Friends School. It's the same school Chelsea Clinton attended. President Jimmy Carter is the only president in recent history to send a child to public school.