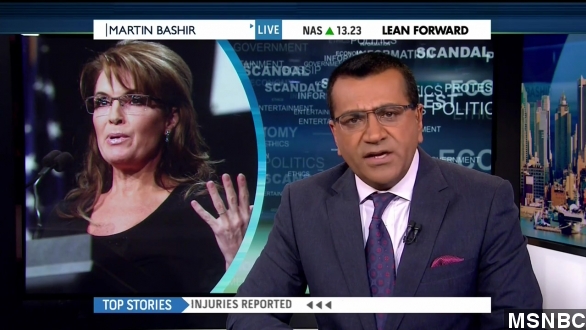 What started as a speech about the national debt turned into a cable news fight between Sarah Palin and Martin Bashir.

Here's an unfortunate example of low political discourse. What started as a speech about the national debt turned into a very unproductive cable news fight.

PALIN: "Borrowing from China. When that note comes due, and this isn't racist, but it's gonna be like slavery when that note is due." (Via The Des Moines Register)

Palin's comparison of the federal debt to slavery raised some eyebrows — but no one seemed more irked than MSNBC's Martin Bashir, who in an effort to illustrate how terrible actual slavery was, described a punishment used by British slave owner Thomas Thistlewood in the 1750s.

"...a slave named Darby catched eating canes had him well flogged and pickled, then made Hector, another slave, s-h-i-t in his mouth."

Annnd then he brings it back to Palin...

"If anyone truly qualified for a dose of discipline from Thomas Thistlewood, she would be the outstanding candidate."

Bashir did end up apologizing —

— which Palin accepted Sunday while also doubling down on the debt-slavery analogy. (Via Fox News)

But the fact Bashir didn't get any other punishment from the network raised questions from TV commentators like Mediaite's Joe Concha.

And the Baltimore Sun's David Zurawik:

DAVID ZURAWIK: "Why haven't they called Bashir out and lack of punishment for him?" (Via Fox News)

The network's Alec Baldwin recently got a two week suspension for hurling an anti-gay slur at a photographer. Thing is — it's been a couple days since the Palin-Bashir thing all began — and while the chorus of critics against Bashir have started to grow, The Daily Beast's Lloyd Grove suggests it would be unlikely — and maybe even unwise — for MSNBC to do anything now after the network's silence so far.

​"...the inescapable conclusion would be that his bosses ... put their wet pinkies in the wind and waited to see which way it was blowing..."