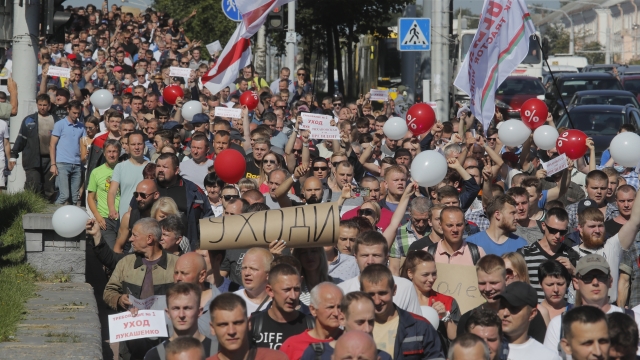 Nearly 200,000 protesters filled the streets Minsk Sunday calling for the longtime authoritarian leader to step down.

Unrest in Belarus enters its second week with the threat of Moscow's intervention growing.

He won a sixth term in a landslide last Sunday. But no international observers were allowed in and opposition leaders accuse authorities of faking the election results.

His opponent fled to Lithuania under duress. But protests have continued and grown in her absence. They've marked the biggest challenge yet to Lukashenko's iron-fisted rule of the ex-Soviet country.

Regime forces initially unleashed a deadly crackdown, detaining almost 7,000 people in the first days of the protests. But police have dialed it back amid criticism from the West and a notable increase in the number of protesters.

Russia says it's ready to step in with the military to help Lukashenko. Belarus shares borders with several NATO countries and is viewed by Russia as a strategic buffer against the western alliance.

At a smaller rally Sunday, Lukashenko claimed without proof that other countries were behind the protests. He also rejected calls for a new election and said it won't happen.