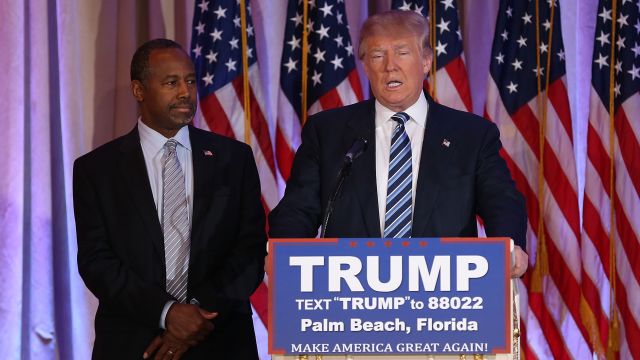 Dr. Ben Carson told Newsmax TV he would rather have endorsed other candidates, but he "didn't see a path" for some of them.

Dr. Ben Carson is endorsing Donald Trump for president, but he isn't exactly throwing his full support behind him.

"Even if Donald Trump doesn't end up being a good president ... I didn't see a path for Kasich, who I liked, or Rubio. ... Is there another scenario I would've preferred? Yes, but that scenario isn't available," Carson said.

The Newsmax TV anchor asked, "With one of the other candidates, you mean?"

Carson made those remarks to Newsmax TV roughly two weeks after dropping out of the GOP presidential race and, somewhat surprisingly, endorsing Trump.

But his comments in the interview about Trump promising him an "advisory role" in the administration should he win in November reinforced previous suspicions that Carson endorsed the Republican front-runner in exchange for a job.

Trump currently leads the rest of the GOP field going into Mega Tuesday and could further distance himself with a strong showing.

This video includes clips from CNN and Fox News, and images from Getty Images.