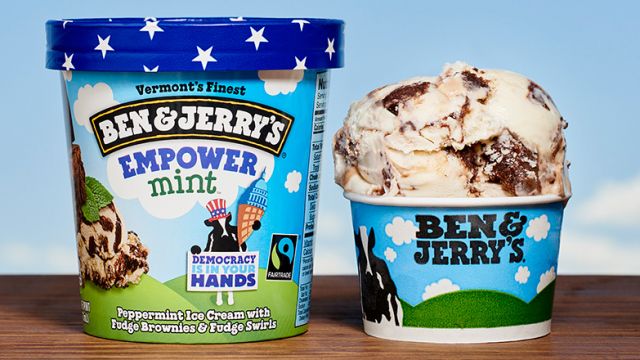 Ben & Jerry's is playing politics again — this time in the name of "benefiting democracy" and with a flavor called "Empower Mint."

The peppermint ice cream with fudge brownies and fudge swirls is meant to call attention to voting restrictions in states across the country.

"We need to have a democracy that represents everyone," founder Jerry Greenfield said.

Founders Ben Cohen and Jerry Greenfield are passionate about this subject. The two were arrested at the U.S. Capitol last month while protesting with Democracy Awakening — an event aimed at curbing big money spent on campaigns and state laws targeting voting rights.

The founders chose to launch this new ice cream flavor in North Carolina, a state where they say certain voters — "particularly Black people and their allies" — are unfairly kept away from the polls.

The Tarheel State requires voters to show a photo ID at the polls. In addition, citizens in the state can't register and vote on the same day.

Ben & Jerry's plans to be "on the ground" in the state — an employee will travel around in a "scoop truck," raising awareness about voter registration and the Voting Rights Act.

Cohen told MSNBC: "You can talk about very serious and very important issues but in a way that incorporates ice cream. And that's a way to connect with people on an emotional level and also on a gustatory level."

We've seen the company use this strategy before — other flavors like "I Dough, I Dough" and "Save Our Swirled" were created to support same-sex marriage and fight climate change.

And the company has already dipped into the 2016 presidential race with a Bernie Sanders flavor. It's also mint-based — apparently that's a very politically active flavor.