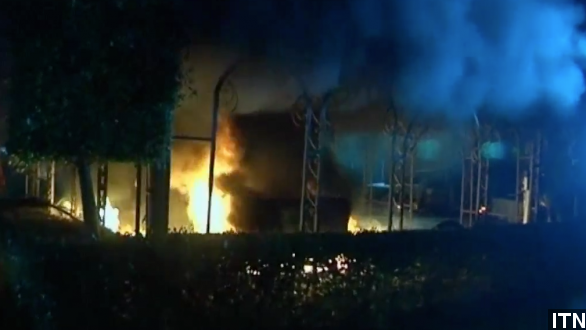 A months-long investigation by The New York Times says Al Qaeda wasn't behind the attack, and backlash against the video was the primary motivation.

Was the attack on the U.S. consulate in Benghazi was a carefully-planned terrorist attack, or a spontaneous response to a YouTube video?

A months-long investigation by The New York Times has once again ignited the conversation over what really happened in Benghazi. (Via ITN)

The Times' David D. Kirkpatrick writes: "The reality in Benghazi was different, and murkier, than either of those story lines suggests. Benghazi was not infiltrated by Al Qaeda, but nonetheless contained grave local threats to American interests. The attack does not appear to have been meticulously planned, but neither was it spontaneous or without warning signs."

That excerpt pretty much encompasses the main points of debate about the attack: Who was behind it and why, and whether it was planned.

​Rather than Al Qaeda, the Times says those responsible were local militants that benefited from U.S. support during the uprising against Moammar Gadhafi back in 2011. (Via CBS)

And it was this anti-Islamic video posted to YouTube — “Innocence of Muslims" — that largely fueled the violence according to The Times' investigation. (Via YouTube / sam bacile)

Perhaps unsurprisingly, NBC cites a senior Obama administration official who said the White House does not dispute those findings.

But critics — in particular Republicans — have pushed a different narrative. Many accused the administration of deliberately misleading the public when former then-U.N. Ambassador Susan Rice said the attack was a spontaneous response to that YouTube video. They accused the administration of downplaying Al Qaeda involvement ahead of the 2012 elections. (Via Politico, ABC)

Among them, New York Congressman Peter King, who blasted the Times' claim that the attack on the U.S. compound was not pre-planned.

KING: “This was a well-coordinated attack ... This was not a ragtag group.” (Via Fox News)

The New York Times investigation doesn't entirely vindicate the administration though, and suggests some warning signs went unnoticed. Kirkpatrick reports the U.S. was aware of the growing threat from local militants, but was overly focused on Al Qaeda at the time.