Berkeley Police Can Now Use Pepper Spray On Violent Protesters 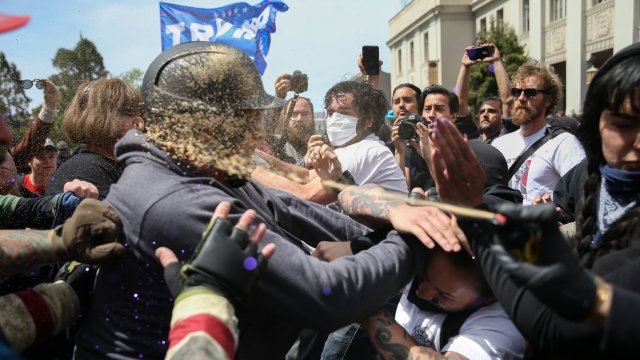 The Berkeley City Council voted Tuesday to allow police to use pepper spray on violent protesters.

Police in Berkeley, California, are now allowed to use pepper spray on violent protesters.

According to local media, Berkeley's city council voted 6-3 on Tuesday to change a two-decade-old policy that barred officers from using pepper spray for crowd control purposes.

Berkeley police have been allowed to carry small pepper spray cans for use on individual suspects during that time.

The revised policy authorizes police to discharge the weapon on people "who are committing acts of violence upon police or others."

But officers can't use pepper spray to control crowds, and they can't spray people participating in nonviolent protests, even if those protests are illegal.

Illinois Sues Chicago To Force An Overhaul To Its Police Practices

Illinois sued Chicago over reforming the city's often-maligned police department and called for independent oversight of the overhaul.

The change comes after recent violent protests in the city. The police chief argued his officers need to be able to use pepper spray when protests get out of hand.

The council's decision comes ahead of planned speeches by several controversial figures at the University of California, Berkeley.