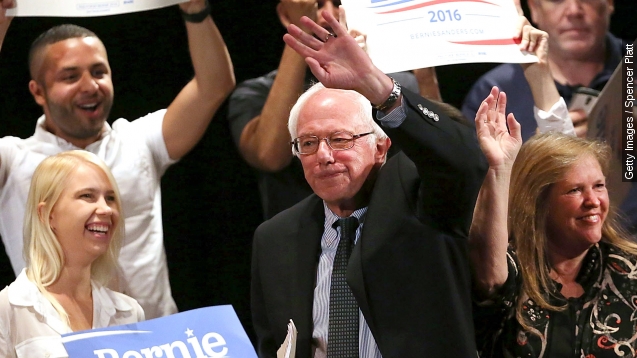 I don't know if you heard, but Bernie Sanders really doesn't like big money in politics.

"In the United States of America, billionaires should not be able to buy elections," Sanders said.

"Over 2 million contributions have been made to the only campaign that rejects a corrupt campaign system," Sanders said in a brand new ad celebrating campaign contriubtions.

The campaign says those 2 million contributors are overwhelmingly small donors. In a presidential campaign shaping up to be the most expensive in history, with most of the prominent candidates being backed by big money and even bigger super PACs. (Video via Bernie 2016)

As a matter of fact, Sanders is just one of two of the major candidates who doesn't have an official affiliated PAC. I'm pretty sure you can guess the other ...

On the other hand, even if Sanders may need some big money, he doesn't even want it. And he proved it by sending a "cease and desist" letter to an unaffiliated super PAC because it was apparently causing "confusion" for donors. According to PolitiFact, there are two PACs still operating on behalf of Sanders, but those are unaffiliated with the actual campaign.

The Sanders campaign says it's on track to beat the best grassroots campaign in history: President Obama's re-election run. By the end of 2011, Obama had pulled in 2.2 million donations, something that had never been done before.

The only issue with small donations is they don't amount to a ton of money. According to FEC filings, Sanders has about $41 million. Compare that to Jeb Bush's $125 million hoard, and Democratic front runner Hillary Clinton pulling in $100 million.