Bespoke Tailor Stitches Together A Legacy 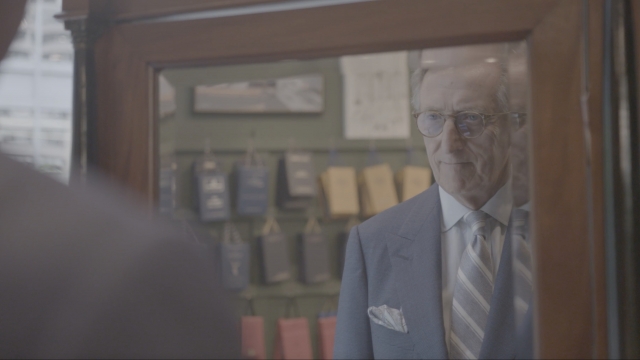 Bespoke suit-making for men is a dying art form — thanks to fast fashion, most men don't wear such clothes to work anymore.

Leonard Logsdail is a one-of-a-kind craftsman, like the suits he makes.

"When I have the fabric on my board, I can see in my mind's eye what it's going to look like on the on the client," said Logsdail.

A bespoke tailor by trade, Logsdail has spent over 50 years creating custom clothes based on each customer's unique request and body measurements.

"Bespoke tailoring comes from the word bespoken. Somebody walks in and talks an order. They say, 'I would like such and such a blue.' And I go to the fabrics and show them the fabrics. And they talk their way through," said Logsdail.

It's an artform considered the highest level of tailoring.

"I make a suit particular for one person and it only fits one person. And I fit it to that body," he said.

It requires meticulous attention to detail.

"Somebody walks through the door, and I stand up the front here and watch them as they come from the elevator to me. So, I've got their body figuration in their stance, because as soon as you get the tape measure out, they remember everything their mother ever told them about standing up straight and holding in their stomach, which is not how you make the suit. You've got to be the body that they are," said Logsdail.

Logsdail's Manhattan shop in midtown is tucked above the bustling streets on a quiet, but busy floor, with fabrics and finished suits on display. But his career began along Savile Row, the section of London famous for producing the best bespoke tailors.

"So, I come from one of the poorest areas of London where, you know, we were taught to be fodders for industry. It's the best way to describe it. Trash collectors, road sweepers, work in factories. I didn't know what I wanted to do. I knew everything I didn't want to do. I had no idea. So, I went to a tailoring school as a stopgap. And it's like I was home when I went there," he said.

But learning the trade didn't come without hurdles.

"I had about seven or eight suits that were thrown back at me. I'd paid for the cloth, I'd paid for the making, and then I had to give the deposit back and it really hurt. And that's when I learned it's not my suit, it's your suit. I think that was one of the real pivotal moments, because I learned if I needed to earn money and feed myself at the time, that I had to get paid for what I did," said Logsdail.

Logsdail says that lesson proved invaluable in helping him hone a skill that ultimately caught the attention of Hollywood.

"I was sitting on one of those chairs out the front one day, talking to a friend of mine from San Francisco, the phone rang and when I picked it up there was this lady on the phone, and she said, my name is Michelle and we're working on this movie called The Good Shepherd. And we wondered if you be interested in making a suit for Robert De Niro," said Logsdail.

Since that call, Logsdail has gone on to tailor suits for dozens of movies, some of which have led to incredible encounters.

"One of them was "Wall Street 2," because I really enjoyed working with Michael Douglas. I thought he was a sweetheart and the other one was "Mary Poppins 2," because I got to make a suit for Dick Van Dike. I mean, I've worked with DiCaprio, Denzel Washington, you name them, I've worked with them. He's the only person I was interested in having to photograph," he said.

But despite how popular Logsdail's work is with clients in Hollywood, New York and abroad, he says it's an art form with an uncertain future. It's a labor of love in desperate need of a new generation of tailors with the patience and fortitude to quite literally stitch on.

"It's been a challenge to keep business going. And now it's been difficult to get workers because it's much easier to go and start earning money sitting at the computer than it is learning how to sew with a needle and thread," he said.

Retail Sales Up 0.3% In August From July Amid Inflation

"I believe I'm the only person that does exactly what I do in New York. And I think there's only four or five in the whole United States now. It's a dying breed. So, anybody who is looking, needs to start coming round and seeing all these guys because they ain't going to be around for much longer," said Logsdail.

And his cheaper competitors can deliver their suits quicker.

"When somebody comes in now, I'm telling them to probably three months at least before they'll see the suit, because, you know, I have one pair of hands… I'm sitting talking with you now, which means I'm not cutting my suits out. And so, the tailors have got one pair of hands. I can only work on one suit at a time. So, you know, it's finite the amount of clothes we can make on any given week."

While a bespoke suit is steep in price and time commitment, Logsdail swears it's an investment customers you can truly wear for decades to come.

"You know, I say this all the time, that fashion goes out of style, but style does not go out of fashion. So, if you have something made here and if you want a fashion forward, yeah, I'll do it. But when the fashion changes, that suit's old. But if you have something that's made with style, you can wear it and it's relevant from 1993 up to here," said Logsdail.