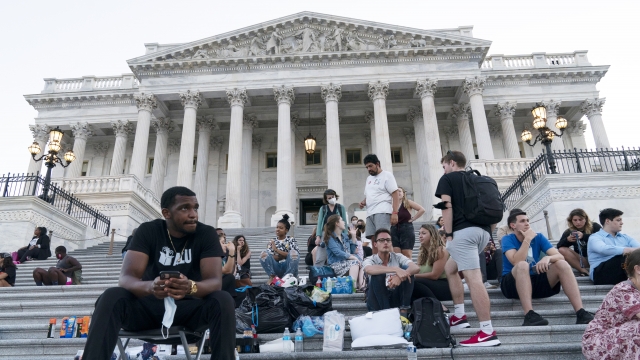 The White House says 1 in 3 households facing eviction is protected by state and local moratoriums.

The White House is pressing state and local governments to swiftly adopt policies to protect renters after an eviction moratorium expired over the weekend, potentially pushing millions of Americans out of their homes.

In a statement on Monday, the White House emphasized that the federal government has provided $46.5 billion to keep renters in their homes. But it accused states and cities of being “too slow to act,” preventing that aid from making its way to tenants whose livelihoods have been upended by the pandemic.

The focus on states comes as President Joe Biden faces stinging criticism, including from some in his own party, that he was was slow to address the end of the moratorium. House Speaker Nancy Pelosi called the prospect of widespread evictions “unfathomable.”

The Congressional Black Caucus intensified pressure on the White House to issue an immediate extension. And one Democrat, Rep. Cori Bush of Missouri, who has been camped out in protest, had a brief conversation at the U.S. Capitol with Vice President Kamala Harris on Monday.

Some people were at risk of losing their homes as soon as Monday. But the White House insists there is only so much it can do on its own and that state and local leaders need to step up and get the aid out.

“The president is clear: If some states and localities can get this out efficiently and effectively there’s no reason every state and locality can’t,” Gene Sperling, who oversees the administration's coronavirus relief plans, told reporters. “There is simply no excuse, no place to hide for any state or locality that is failing to accelerate their emergency” rental assistance.

Late last week, Biden announced he was allowing the ban to expire. The White House said he would have supported an extension of the moratorium but pointed to the Supreme Court, which signaled in a 5-4 vote in late June that it wouldn’t back further extensions. Justice Brett Kavanaugh wrote that Congress would have to act to extend the moratorium. The White House noted that state-level efforts to stop evictions would spare a third of the country from evictions over the next month.

While the administration is still investigating legal options to forestall evictions, officials said their options were limited. White House press secretary Jen Psaki said that the CDC, which issued the eviction ban, was “unable to find legal authority for a new, targeted eviction moratorium.”

Mass evictions could potentially worsen the recent spread of the COVID-19 delta variant as roughly 1.4 million households told the Census Bureau they could “very likely” be evicted from their rentals in the next two months. Another 2.2 million say they’re “somewhat likely” to be evicted.