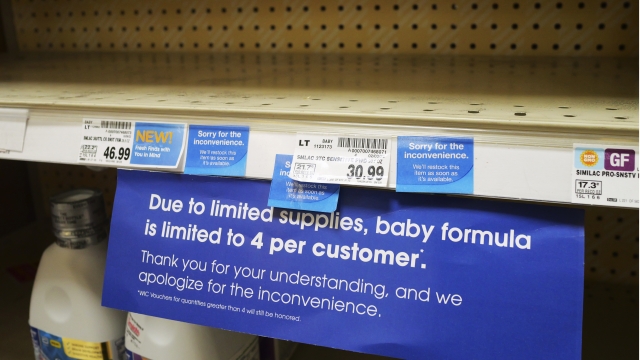 Experts say ramping up formula imports would be a quick way to beef up supply, but restrictive safety regulations and trade policies are in the way.

The White House has approved the first mission under operation fly formula — using military aircraft to bring in much-needed baby formula from Switzerland to the U.S.

Experts agree that ramping up imports of infant formula would be a quick way to beef up supply, but restrictive safety regulations and trade policies supported by both Republican and Democratic administrations are standing in the way.

"The moves that the president and congress are making are just missing the point a little bit," said Gabriella Beaumont-Smith, a policy analyst at the CATO Institute.

About 98% of infant formula consumed in the U.S. is produced domestically. Only 2% is imported, mainly from Mexico.

Although formula is not subject to FDA approval, it has to meet strict labeling and ingredient requirements to be sold in the U.S.

FDA officials are allowing more imports in light of the shortage, but only after the formula meets FDA standards.

"I want to be clear — under this process, an infant formula would only be imported after the agency reviews the product and determines the product is safe and provides adequate nutrition. Safety is paramount," FDA Commissioner Robert Califf told members of Congress in a hearing on Thursday.

Experts say the FDA's requirements are cumbersome and counterproductive and argue European baby formula is often subject to even stricter safety standards.

"The root problem would be to loosen those regulations or have some kind of mutual recognition deal where if the European Union and other relevant governments with good standards approve of the milk for their children, well, it's good enough for our children, too, so we should let that in automatically. That would address the root problem," said Ryan Young, a senior fellow at the Competitive Enterprise Institute.

But it's not just food and safety regulations — tariffs and outright import bans have also stunted the baby formula market.

"There is not so much of an incentive for foreign businesses to try and break into the us market, especially when they have to deal with high tariffs and costly regulatory barriers," Beaumont-Smith said.

The tariffs are meant to protect U.S. dairy producers from foreign competition, which is often subsidized, but experts say they also make the industry more fragile.

"The trouble is that when you do that, you block out a lot of competition. So, when one factor goes down, you have fewer ways to make up the difference," said Young.

And the U.S.-Mexico-Canada trade agreement, negotiated by former President Trump and supported by then-candidate Biden, put even further restrictions on Canadian formula.

As a result, the U.S. imported no formula from Canada last year.

So far, the White House has not considered any tariff relief to tackle the problem, instead using the defense production act to fly in emergency imports and accelerate the delivery of supplies to domestic manufacturers.

"The DPA is directing agencies to go pick up formula and bring it to the U.S. But if you were to liberalize trade and allow Americans to search and buy the specific formula that they want, that's going to service Americans better," said Beaumont-Smith.

The move comes amid a nationwide shortage of infant formula after the nation's largest production plant was closed down due to contamination issues.