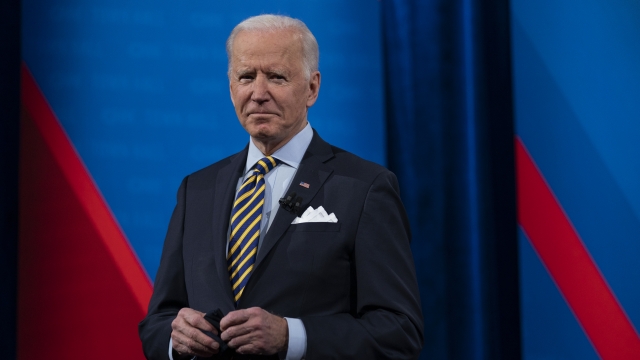 Despite complaints over the lack of a comprehensive vaccine distribution plan, the Biden White House is using the model developed under Trump.

Nearly a month into his presidency, President Biden and his administration continues to blame former President Trump for the slow rollout of covid vaccines.

"Look what we inherited: We inherited a circumstance here, where — and now for the first — we did a lot in the first two weeks," President Biden said during a CNN town hall on Tuesday.

"There was no national strategy or plan for vaccinations, we were leaving it to the states and local leaders to try and figure it out," Vice President Kamala Harris told Axios.

But despite the criticism, in key ways the Biden administration is following the playbook started under Trump.

The Department of Defense confirms to Newsy that the Biden administration is still using the same vaccine distribution model developed by Operation Warp Speed under Trump and that effort is still being overseen by Gen. Gus Perna — who led the effort last year

"Centralized distribution is being managed by the CDC through an existing contract… to deliver vaccines and supply kits… We continue the mission to accelerate the development, manufacturing and delivery of safe and effective vaccines and therapeutics, and Gen. Perna continues in his role overseeing this effort," said Laura Ochoa, a spokeswoman for Gen. Perna.

The Biden administration has taken steps to increase vaccine supply and boost the number of vaccinators, but the infrastructure to get the shots from the manufacturing line into American's arms hasn't changed.

"It's more or less the plan that we put together frankly that's happening and maybe there are improvements and that's really great, some acceleration. But clearly we didn't go from no plan to a plan," Dr. Moncef Slaoui, the former head of Operation Warp Speed, told Fox Business.

White House Press Secretary Jen Psaki on Wednesday doubled down on the vice president's comment, saying there was no comprehensive plan.

"So there are significant steps that have been taken.  What they were conveying was that we did not have a comprehensive plan.  There were not enough vaccines.  There was not enough coordination with governors and local officials.  And there were not enough places where people could get the vaccine.  And now we’re working to address that," she told reporters.

This month, President Biden said the federal government had purchased an additional 200 million vaccine doses from Moderna and Pfizer — vaccines that were developed in record time while President Trump was in office.