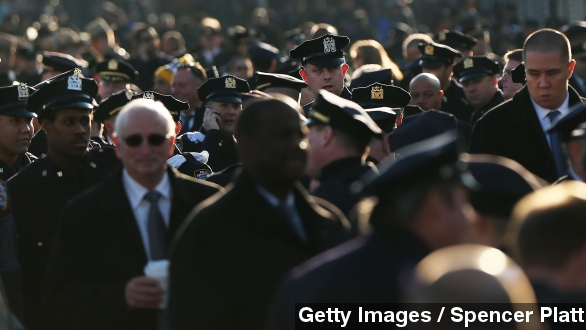 Ramos was one of two New York police officers targeted and killed last week in Brooklyn.

“I’m sure I speak for the whole nation when I say to you that our hearts ache for you,” said Biden.

“Our hearts are aching today. We feel it physically. We feel it deeply. New York City has lost a hero,” said de Blasio.

730 police officers from around the nation that were flown in by JetBlue were in also in attendance.

The funeral came a day after an equally packed wake that lasted eight-hours. Because of the crowds, the event had to be projected on a screen to onlookers outside.

“My father was a man of character, a selfless man. Dad, i'm forever grateful for the sacrifices you made to provide for me and Jayden,” said Justin Ramos.

Ramos and his partner were shot to death December 20 while sitting in their patrol car.

Ramos was studying to become a pastor, and those who knew the officer said he viewed his work in the police force as “a ministry.”

Ramos leaves behind a wife and two children. Funeral plans for Ramos’s partner, Officer Wenjian Liu have not yet been announced.