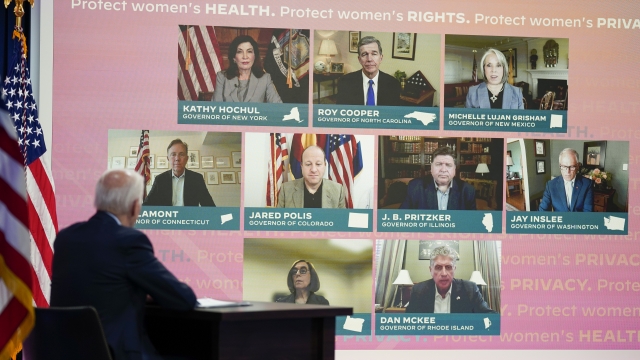 "We're in the process of looking at all the alternatives," President Biden said.

One day after returning from international summits in Europe, President Biden described the ruling as "tragic" and warned that Republicans could try to enact a nationwide ban on abortion if they retake control of Congress. He urged Democrats to elect at least two more senators so they could create an exception to the filibuster and codify in law the protections that had been provided under Roe v. Wade.

At least two Democratic senators, Joe Manchin of West Virginia and Kyrsten Sinema of Arizona, have blocked efforts to sidestep the filibuster. The party would need unanimous backing from the Senate's 48 Democrats and two allied independents, plus the tie-breaking vote of Vice President Kamala Harris, to make that rules change over solid GOP opposition.

New Mexico Gov. Michelle Lujan Grisham said Native American tribes, which have a level of sovereignty over their own lands, could also be valuable partners.

"We're in the process of looking at all the alternatives," President Biden said.

However, he did not make any announcements. Some activists and Democrats have been frustrated by what they consider an overly cautious approach from the administration, especially since the court decision has been expected since a draft leaked nearly two months ago.

The justice's June 24 ruling overturned a 1973 decision that had declared a constitutional right to abortion. Each state will now determine whether the procedure can be performed.