Biden Leads By Double Digits As Both Candidates Campaign In Minnesota 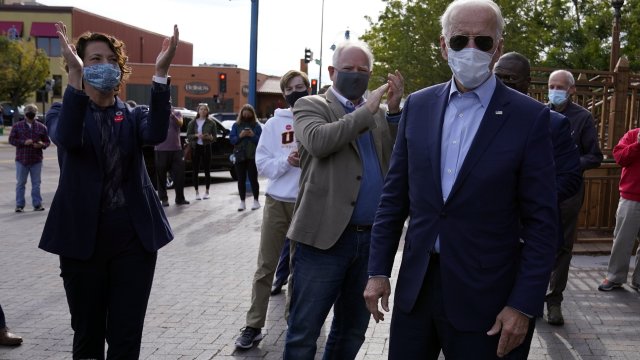 The latest ABC/Washington Post poll has Joe Biden beating President Trump by 16 points in the state.

Americans in several states are already getting the chance to cast their ballots for president in person, including Minnesota, a potential battleground state where Vice President Joe Biden and President Donald Trump traveled Friday.

The Trump campaign says they see an opening; Hillary Clinton won the state by just 44,000 votes. But polls aren't showing the same support. A recent ABC News/Washington Post survey has Biden winning by 16 points. And three recent state polls have him up by 9 points. The Biden campaign is spending millions on TV ads, including Spanish-language ads in Minneapolis.

Clinton never visited Minnesota in 2016, and Trump only campaigned there once. That's in stark contrast to the number of in-person stops the president has made in his re-election bid, and the increased dollars the Biden campaign is putting towards winning the state's 10 electoral votes.

But voters in those rural areas are where President Trump's campaign sees an opening. One of the only Republicans to flip a House seat in 2018 is from the Iron Range, a rural region in the northeastern part of the state. Now, six Democratic mayors from the region are endorsing the president. Eveleth's mayor even spoke at the Republican National Convention.

Minnesota, like so many other states, is facing not only the health and economic fallout from the coronavirus, but also staring down monthslong protests for racial justice after George Floyd was killed by Minneapolis police. Three more states will begin voting next week; most start in October.