Biden Closing The Gap In Ohio, Leans On Local Leaders To Share Vision 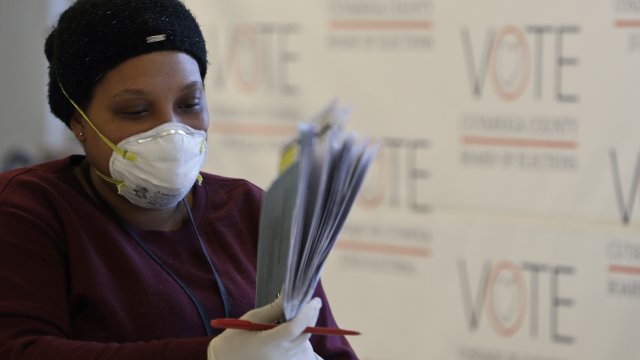 Recent polling has Biden ahead or closing in on President Trump in Ohio.

President Trump's big, comfortable lead in Ohio is closing. Morning Consult polling shows Trump's lead, by eight points in May, has whittled down to three. This isn't happening in a bubble, though. Biden's lead is growing in every potential swing state. In fact, Ohio is the only state in this most recent poll that gives Trump a slight edge.

The Biden campaign knows they need to capitalize on this momentum fast. In doing so, the campaign launched its first ever multiday push in a single state, holding four virtual roundtables featuring some of the state's most prominent Democrats focusing solely on the economy.

Tim Burga, president of Ohio's chapter of the AFL-CIO, says while more union workers than normal went for Trump in 2016, he sees a shift in his state. Burga hosted an event with Chillicothe Mayor Luke Feeny in a county Trump won nearly double the votes of Hillary Clinton. The campaign told Newsy they believe they can make inroads in even the most red areas of the state.

While elections tend to tighten up at this point in the calendar, Ohio's absentee voting begins in just eight weeks, and requests for ballots are already open. Biden's campaign just launched a new ad buy in the state that they're going to start rolling out timed with early voting.

The Biden campaign is planning to run ads throughout the Democratic National Convention in Youngstown and Toledo. Ohio is also part of the $280 million multistate, multiplatform ad blitz this fall.