Biden Looks To Be A 'Healer' During Kenosha Visit 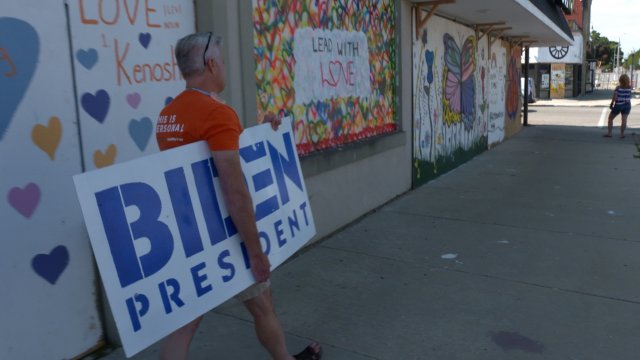 The Kenosha community is looking to move forward after ten days of turmoil following the police shooting of Jacob Blake. But people say who will best lead them through this crisis is unclear.

Unlike the president, Biden met with Blake's family for more than an hour before heading to Grace Lutheran Church to meet with community leaders.

Biden's trip comes after the campaign has mostly resisted travel, seeking to lead on safety during the pandemic. His supporters here see his arrival as the guidance their town, and the country, so desperately needs.

But not everyone is thrilled about his trip and the attention on their town over the last few weeks. Linda Serpe, who has lived in Kenosha since she was 5, supported President Trump's visit, but not Biden's. She says rioters took over their downtown area.

Both candidates have condemned the rioting and violence, but outside of politics, the people here in Kenosha say real change probably won't happen from the top, but instead from within the community. Community officer Dan Madrigano and Stevante Clark, who lost his brother Stephon Clark to a police shooting, say they're working to organize a conversation in this community to heal.