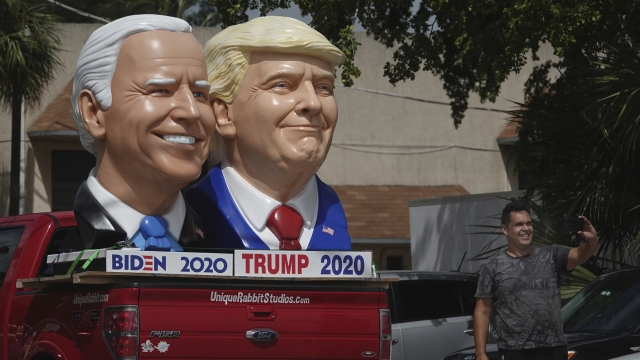 Democratic presidential nominee Joe Biden and President Donald Trump are deadlocked in Florida, according to a new NBC News/Marist poll.

Democratic presidential nominee Joe Biden is slamming President Donald Trump's response to the pandemic. On Tuesday, Biden told reporters in Pennsylvania that President Trump was playing with politics, especially when it comes to a possible coronavirus vaccine.

When asked if he'd take a vaccine approved by the White House before the election, Biden said he would, but only after he'd heard from scientists.

The former vice president is also walking back his own call for a nationwide mask mandate. Biden said a full-on order might be unconstitutional. Back in August, he called for a full mandate, lasting three months. He now says he'd set an example and plead with people to wear a mask.

Meanwhile, President Trump kicked off multiple campaign stops this week in Florida. In the city of Jupiter, the president attempted to highlight his environmental record while endorsing a 10-year moratorium on offshore drilling in Florida, Georgia and South Carolina.

The Trump administration proposed lifting the offshore-drilling ban two years ago. It's also worth noting that the White House has rolled back several Obama-era environmental protections and vowed to withdraw from the Paris Climate Agreement.

A new poll finds he and Joe Biden are neck and neck in the Sunshine State. The NBC News-Marist survey has them deadlocked at 48% among likely Florida voters.