Biden's Immigration Platform Is Ambitious. Is It Realistic? 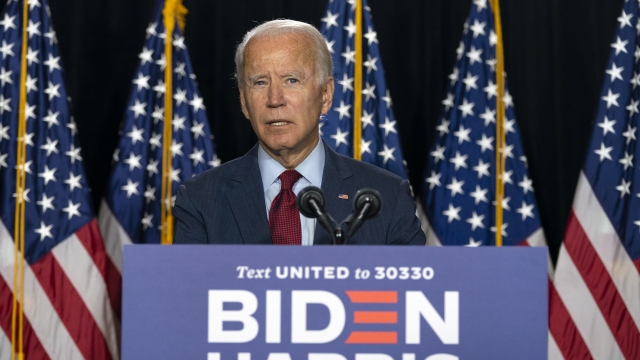 Joe Biden has promised to quickly roll back President Trump's travel bans and asylum restrictions and advance his own bold immigration platform.

For years, President Trump has made cracking down on immigration a key part of his administration's agenda.

Now, Joe Biden, his Democratic challenger, has promised to quickly roll back most of the president's executive actions and advance his own ambitious immigration platform.

"There is certainly a really extreme contrast in the policy positions on immigration of Biden and Trump," said Julia Gelatt, a senior policy analyst at the nonpartisan Migration Policy Institute.

The sharp differences — and what's at stake — is historical.

"I don't think we've seen ever before a president put immigration so much at the forefront of his policymaking as President Trump has done," said Gelatt.

Within the first 100 days of his possible presidency, Biden wants to end President Trump's travel bans and restrictive asylum policies — including the Remain in Mexico program, which forces migrants to wait in Mexico for months for their asylum hearings.

Analysts say the myriad of promised rollbacks are legally doable but would need to be carefully implemented to avoid chaos at the border.

"Hopefully if a new administration comes in and wants to undo some of these things, they have people looking at, 'OK, what does that mean operationally for the agencies at the border?'" said Theresa Brown, a former Homeland Security official who's now director of immigration and cross-border policy at the Bipartisan Policy Center.

The former vice president has also committed to pausing deportations for 100 days.

"In the first 100 days of my administration, no one, no one will be deported at all," Biden said during a CNN debate in march.

Experts say that could lead to a surge in illegal border crossings.

"If they know that there is a possibility that if they arrive, they won't be deported, could that act as a magnet?" asks Brown.

To secure borders, Biden would invest in surveillance technology and would stop construction of the border wall, which he calls ineffective and a waste of money.

Most ambitiously, Biden says he would work with Congress to provide a roadmap to citizenship for around 11 million undocumented immigrants. Congress hasn't passed major immigration legislation in 30 years.

Biden also says he would fully reinstate DACA protections for undocumented immigrants who came to the U.S. as children.

"I think that immigration reform and especially expanding immigration is a really tough sell in a time when our unemployment rates are so high," said Gelatt.

Before the pandemic, Biden proposed increasing visas for foreign workers "based on macroeconomic conditions."

It's unclear where he stands on this now that we're experiencing an economic downturn. But he's indicated he would overturn President Trump's coronavirus immigration freeze.